Removing barriers and facilitating the access of Halal products to the Indonesian market is among the two countries' efforts to achieve the goal.

The agreement on bilateral trade was reached during the visit to Jakarta by Vietnamese Minister of Foreign Affairs Bui Thanh Son who also paid a courtesy call to Indonesian Joko Widodo and co-chaired the 4th meeting of the Joint Committee on Bilateral Cooperation together with his counterpart Retno Marsudi.

The two-way trade in 2021 exceeded the $10 billion target set by the two countries.

To make the US$15 billion goal possible, the two sides agreed to effectively implement the Action Plan for Strategic Partnership in 2019-2023 and build the plan for the 2024-2028 period.

They vow to increase exchange visits of high-ranking officials; remove barriers and boost trade; soon sign a memorandum of understanding on rice trade for the next four years; facilitate investors of both countries, especially in fisheries, hi-tech, and digital economy; ease the access of Halal products to the Indonesian market; increase flights and open new air routes, mainly to tourist attractions and continue solving issues at sea.

They believed that activities for further trade are among efforts for enhanced ties between the two Southeast Asian countries amid celebrating the upcoming 10th anniversary of the Strategic Partnership in 2023.

Vietnamese Ambassador to Indonesia Ta Van Thong said JCBC-4 helps reinforce the Strategic Partnership as it’s in line with the two nations’ long-term interests and gives motivation for the relations, lifting the relations to a new height.

Meanwhile, Indonesian Ambassador to Vietnam Denny Abdi said Vietnam and Indonesia should make full use of a new cooperation strategy by focusing on maritime industry, hi-tech, and digital economy. Their gross domestic product (GDP) might account for 60% of ASEAN’s GDP in the years to come thanks to the two countries’ growth momentum, he added.

Vietnam and Indonesia are big trade partners in the Association of Southeast Asian Nations (ASEAN). In 2021, despite Covid-19, the two countries maintained a series of activities to strengthen the relations with the Economic, Trade, and Investment Dialogue held on April 10 between the Indonesia Embassy in Hanoi and Indonesian companies operating in Vietnam.

On March 17, 2021, Ambassador Denny Abdi was granted an audience by General Secretary of the Communist Party of Vietnam Nguyen Phu Trong. On April 9, a phone talk between Foreign Minister Bui Thanh Son and his Indonesian counterpart Retno Marsudi was held. On the same day, Ambassador Abdi met Minister of Agriculture and Rural Development Le Minh Hoan. 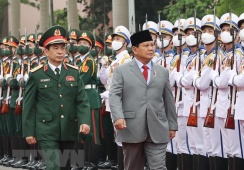 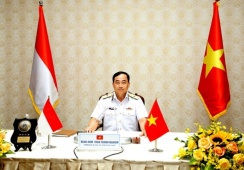 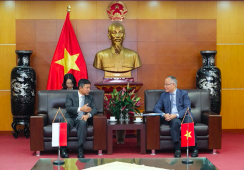