Under a “New Level” cooperative relationship, Japan and Vietnam will collaborate at various levels.

Japan and Vietnam signed an agreement on transferring defense equipment and technology on September 11 in the framework of the visit by Japanese Defence Minister Kishi Nobuo to the Southeast Asian country.

At the meeting with Kishi, the host country's National Defence Minister Phan Van Giang highly valued the visit, the first foreign trip since Kishi took office, stressing it would strengthen defense cooperation between the two countries.

For his part, Minister Kishi spoke highly of the achievements in the national construction and consolidation of national defense and security that the people and People's Army of Vietnam have attained over the years.

The two ministers assessed defense relations over the past time, exchanging on the situation in the region and the world. They emphasized the importance of freedom of navigation and overflight in the context of complicated developments in the region.

The two sides reaffirmed the necessity of complying with international law, including the United Nations Convention on the Law of the Sea (UNCLOS), which was adopted in 1982, and exchanged experiences on the fight against Covid-19 of each country's army.

Recognizing that Japan-Vietnam bilateral defense cooperation has reached a “New Level,” the ministers discussed the ways in which it should now evolve.

The ministers welcomed the signing of the agreement and decided to accelerate consultations for the transfer of specific equipment including vessels.

They also agreed to enhance coordination towards the signing of memorandums to facilitate cooperation between the defense authorities of Japan and Vietnam in the fields of cybersecurity and military medicine.

The ministers agreed to more proactively contribute to peace and stability in the region by continuing to foster bilateral defense cooperation, including through high-level exchanges, promotion of further cooperative activities associated with peacekeeping operations, and port calls in Vietnam by Japan Self Defense Forces (JSDF) vessels and aircraft.

Minister Kishi reiterated that the “ASEAN Outlook on the Indo-Pacific” (AOIP) and Japan’s FOIP share fundamental principles, and stated that Japan-Vietnam defense cooperation reaching a “New Level” will greatly contribute to realizing AOIP and FOIP.

The two leaders shared the view that, in the spirit of Japan-Vietnam defense cooperation at the “New Level,” the defense authorities of Japan and Vietnam will engage closely to organize the “Japan-ASEAN Cyber Security Training Program for Defence Authorities” announced by Minister Kishi at the 6th Japan-ASEAN Defence Ministers’ Informal Meeting.

During this visit, Minister Kishi on September 11 visited the President Ho Chi Minh Mausoleum and the Vietnam Military History Museum. 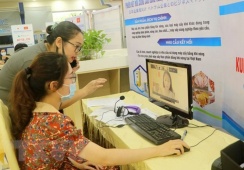