Vietnam defeated Malaysia by a three-goal margin in the match, marking the Golden Dragons' six-year victory strain against Harimau Malaya.

Vietnam national football team on December 27 made the second straight win to top Group B in the AFF Cup 2022 after beating Malaysia by 3-0.

Both Vietnam and Malaysia got the game underway in confidence. The early stage of the match saw a balance between the two teams.

Striker Nguyen Tien Linh scored the opening goal for Vietnam in the 28th minute as his header bounced hard into the net from the corner kick taken by central midfielder Do Hung Dung.

As things went well for Vietnam, striker Nguyen Van Toan received the second yellow card in the 32nd minute and had himself an early bath.

With the advantage in numbers, Malaysia took control of the game and had several clear-cut chances. But goalkeeper Dang Van Lam and his teammates played well to secure the first-half win.

Vietnam kept a cautious stance in the second half, but the players were ready to move forward whenever possible.

After the two teams were even in number, Vietnam regained control of the game and had several opportunities.

Vietnam will visit Singapore for its third match in Group B on December 30. 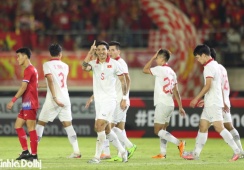