Rescuers engaged in the journey of nearly 1,500km to the release site and eight months of rehabilitation.

Save Vietnam’s Wildlife (SVW) has released 12 Sunda Pangolin back into the wild on the occasion of World Pangolin Day (February 19).

In collaboration with Cuc Phuong National Park, SVW returned into their natural habitat the pangolins, which were rescued from the illegal wildlife trade.

The home journey of 12 pangolins lasted for two days starting on February 17, requiring the team a journey of nearly 1,500km to the release site.

Before going back to nature, the pangolins were treated well by SVW veterinarians and keepers for six to eight months. The rehabilitation at SVW center was taken shortly after the pangolins suffered dehydration, force-feeding, stress, and injury caused by snare traps, illegal wildlife trade, and transportation.

“The release of 12 pangolins is more meaningful to us on the celebration of World Pangolin Day this year, said Nguyen Van Thai, Founder and Executive Director of SVW. He hoped that this event will help “spread out the message about why we should save pangolins, the most trafficked mammal in the world, from extinction.”

With the latest move, SVW expects to raise the community’s responsibility and awareness in the conservation of pangolins and wildlife. “Don’t eat, don’t buy, don’t use, don’t hunt” illegal wildlife products and join us in the fight to stop the extinction and champion the recovery of threatened species in Vietnam,” called on Thai, the 2021 Goldman Prize recipient.

As the first specialized pangolin rescue center in Southeast Asia and also the center with the most popular pangolin in Vietnam, SVW has directly rescued 1,671 pangolins since 2014. More than 60% of rescued animals have been released back into the wild.

World Pangolin Day is annually celebrated on the third Saturday in February. It is a day for the global pangolin community to be together to raise awareness of the importance and threat of these beautiful creatures.

Like many other species, pangolins are threatened by human activity, including encroachment into protected areas and wildlife trafficking. Pangolins are the most trafficked mammal in the world.

There are eight species of pangolins in the world, of which Vietnam has two species namely Sunda pangolin and Chinese pangolin. Both are Critically Endangered (CR) in the IUCN Red List due to poaching and illegal trading. In addition, Sunda pangolin (scientific name Manis javanica), is listed in group IB according to Decree No.06/2019/ND-CP issued by the Vietnam Government on the management of endangered, precious and rare species of forest fauna and flora and observation of convention on international trade in endangered species of wild fauna and flora.

Save Vietnam’s Wildlife is a non-profit organization in Vietnam founded in 2014 on the critical need for more effective solutions to secure a future for Vietnam’s wildlife, conducting many long-term conservation projects and programs. Its financial and human resources are used for “direct and ex-situ conservation” including Wildlife Rescue and Rehabilitation, Site Protection, Breeding Conservation, Research Conservation, Education Outreach and Advocacy. 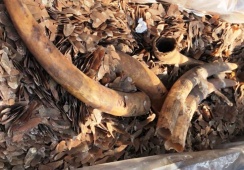 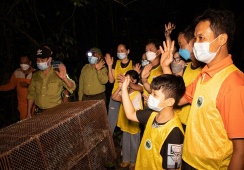