The resurgence of SARS-CoV-2 coincides with the national holiday sparks fear for widespread community transmission.

Vietnam is preparing for the possibility of 30,000 Covid-19 cases after the virus has resurged in the country for few days and coincided with the national four-day holiday that end on May 2.

The plan is included in the prime minister’s order sent to heads of relevant state bodies and localities on May 3.

The Ministry of Health is responsible for building the scenario which will be submitted to the government’s members in May.

Basing on the scheme, authorized agencies will get ready to build facilities, stockpile medical equipment, and promote production of homegrown vaccines, vaccine import, and inoculation.

The scenario of having 30,000 infections been considered at a meeting on April 29 chaired by Deputy Prime Minister Vu Duc Dam who is head of the National Steering Committee for Covid-19 Prevention and Control.

At the meeting, Dam asked different sectors to get involved in the preparations for the scenario.

The Ministry of Health is required to update new technologies and biological test methods and boost the domestic production of this kind.

Meanwhile, the Ministry of National Defence is tasked to toughen control over quarantine barracks and quarantine facilities to avoid cross infection in those centers and the community. The army is also asked to get ready for the widespread transmission.

Since the resurgence of SARS-CoV-2 on April 29 after the strain of 34 days without community transmission, Vietnam has confirmed nearly 30 cases in several cities and provinces namely Hanoi, Ho Chi Minh City, Ha Nam, Vinh Phuc, and Bac Giang.

After the disease broke out, the country has conducted multiple measures and required the engagement of all stakeholders into the fight against the pandemic.

A number of cities and provinces have so far suspended crowd gathering and non-essential services like festival, religious practices, street food, bar, and karaoke lounges.

As pursuing the dual goal of containing virus and developing economy, Vietnam vows to respond to the outbreak as quick as possible, imposing tough measures, and minimizing impacts on people’s livelihood.

Meanwhile, warning on the pandemic and guidelines on preventive measures are updated daily in media, via social network, and SMS.

Vietnam has overcome three waves of coronavirus infections with quite few deaths [35 deaths for a year now]. As of May 3, it has reported 2,962 infections. 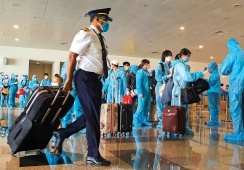