The achievements of the Vietnamese national team at this year's Olympiad continue to show the quality of general education in the country.

All six members of the Vietnamese team participating in the 63rd International Mathematical Olympiad (IMO 2022) have secured medals, with two golds, two silvers, and two bronzes, lifting Vietnam ten places compared to 2021 results, according to the Ministry of Education and Training (MoET).

The results placed Vietnam in the fourth position out of the 104 teams participating in the competition, behind China, South Korea, and the United States, the MoET said.

The two students who achieved the gold medals were 12th-grader Ngo Quy Dang and 11th-grader Pham Viet Hung. Both of them are from the Hanoi University of Science High School for the Gifted under the Vietnam National University, Hanoi (VNU-HN).

Notably, Quy Dang got the highest score in the Olympiad with 42/42 points. It marked the first time in 20 years that a contestant from Vietnam has scored maximum points at the IMO, with the last time being back in 2003 when two local representatives scored a  total of 42 points each.

The IMO 2022 has been held in person in Oslo (Norway) from July 6 to 16,  featuring the participation of 589 competitors from 104 countries and territories worldwide.

The IMO is a contest held specifically for high school students. Each country is allowed to send up to six participants.

According to the MoET, the achievement of the Vietnamese national team at this year's Olympiad continue to show the quality of general education in the country, even after three years of severe disruptions caused by the pandemic.

“Besides, it shows the discovery and nurturing of excellent students is going in the right direction,” the MoET said. 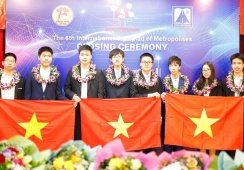 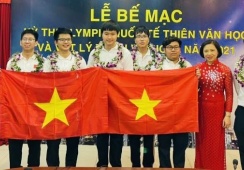