The close bonds in terms of culture and history, as well as mutual interests on major global issues, have laid the foundation for a strong bilateral partnership between the two countries, said Vietnam’s Party chief Nguyen Phu Trong.

He also congratulated Vietnam for its achievements in development and heightened status on the global stage.

For his part, Trong said Vietnam supports India’s key contribution to Asia and the world, saying the traditional friendship between the two countries has been nurtured by generations of leaders and peoples of the two countries.

“The close bonds in terms of culture and history, as well as the mutual interests on major global issues, have laid the foundation for a strong bilateral partnership,” Trong added.

According to Trong, Vietnam gives priority to strengthening the comprehensive strategic partnership with India in bilateral and multilateral frameworks.

As the two countries are celebrating the 50th anniversary of diplomatic relations (January 7, 1972-January 7, 2022), both leaders have expressed satisfaction with the progress of the bilateral relations, including the support of each side in the Covid-19 response.

The two leaders agreed to further enhance political trust and high-level exchanges between Vietnam and India; promote the cooperation between the Communist Party of Vietnam and political organizations in India, including the Bharatiya Janata Party (BJP).

They requested Government agencies to push for measures aimed at strengthening bilateral relations in key fields, including economy, trade, and investment, for a speedy recovery in the post-pandemic period.

Both countries would continue to cooperate in defense, tourism, and cultural exchange, as well as close coordination in regional and global multilateral forums for the benefit of the peoples of the two countries, in turn contributing to peace, stability, and prosperity in the world.

Amid growing global uncertainties, Trong called for the two countries to expand cooperation with multilateral bodies such as the UN and ASEAN to maintain peace, stability, the rule of law, and protect the lawful rights of developing countries.

Trong and Modi also exchanged views on regional and international issues of mutual concern. Regarding the East Sea, both agreed on the necessity to ensure peace, stability, and cooperation based on international law, including the UN Convention on the Law of the Sea (UNCLOS) 1982, for open and freedom of navigation.

Regarding the situation in Ukraine, the two leaders reaffirmed the significance of respecting international law and refraining from using force or threatening to use force. They urged those involved in the conflict to prioritize dialogue and negotiation to seek a long-term and peaceful resolution to the hostilities. 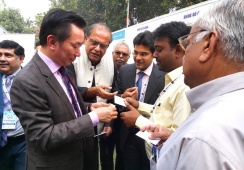 Vietnam is among top expansion destinations for Indian companies