The Vietnamese Prime Minister expressed thanks for Romania’s support of 100,800 doses of the AstraZeneca vaccine, which demonstrates the sincere friendship and close linkage between the two countries.

Prime Minister Pham Minh Chinh called for the Romanian Government to continue sharing vaccine doses with Vietnam as the country is making best efforts to stamp out the Covid-19 outbreak.

Chinh made the request in a meeting with Romanian Ambassador to Vietnam Cristina Romila today [July 30].

On this occasion, Chinh expressed his thanks for Romania’s support of 100,800 doses of AstraZeneca vaccines for Vietnam, which demonstrates the sincere friendship and close linkage between the two countries.

“Vietnam gives priority to the longstanding bilateral relations with Romania that has been nurtured for the past 70 years,” Chinh noted, saying with Romanian timely support, no doubt Vietnam will soon fight off the pandemic.

According to Chinh, both countries should take advantage of the EVFTA to boost bilateral trade, with Romania opening its market for Vietnam’s coffee, seasonal fruits, and seafood.

“Vietnam, meanwhile, could serve as the gateway for Romania to penetrate the ASEAN market,” he added.

On issues of shared interests, Chinh and the Romanian Ambassador agreed to strengthen cooperation in the multilateral and regional forums.

The two stressed the importance of securing security and free navigation on the East Sea, as well as resolving territorial disputes through peaceful means that are based on international law and the 1982 UN Convention on the Law of the Sea (UNCLOS). 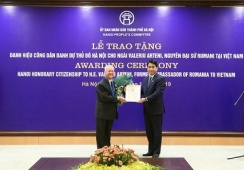