For both countries, the post-Covid economic partnership is the best way to minimize exposure to future trade disruptions and enhance supply-chain resilience.

The four-day visit starting on December 12 to South Korea paid by Vietnamese Chairman of National Assembly (NA) Vuong Dinh Hue has set up the foundation for the two countries economic recovery in the post-pandemic era.

South Korean Ambassador to Vietnam Park Noh-wan commented on the visit, saying that the signing of a series of agreements including that on social insurance and those in information and communications, climate change, tourism, and culture have supported his idea.

At the summit, South Korea’s companies were given information on investment law and preferential policies for foreign investors by officials from the Government of Vietnam and localitie where are home to many South Korean projects like Bac Ninh, Thai Nguyen, Ha Nam, Hai Duong, and Thai Binh.

The Covid-19-associated crisis is likely to further reinforce this trend since both countries engage more in the diversification of supply chains. For that reason, the economic partnership is the best way to minimize exposure to future trade disruptions and enhance supply-chain resilience. Being the largest investor in Vietnam with more than US$74 billion, South Korea is expected to increase investment inflows in the time to come with the operations of multinational corporations.

South Korean NA Speaker Park Byeong-seug said in talks with the Vietnam News Agency before Hue’s visit that the two sides would discuss removing obstacles hindering goods trade and travel activities between the two countries; institutionalize regulations on issues that the governments had agreed to.

The two sides will also discuss progress in cooperation and exchanges between the two parliaments since the meeting between the two National Assembly Speakers last year.

Both countries agreed to raise the two-way trade by $100 billion in 2023 and $150 billion in 2030, with a trade balance for Vietnam by strongly facilitating the shipment of farm produce and seafood.

According to Ambassador Park Noh-wan, the two parliaments have enhanced relations over the past years with visits paid to Vietnam by eight South Korean National Assembly chairmen and five Vietnamese NA chairmen to South Korea.

South Korea expects to elevate the relations with Vietnam to Comprehensive Strategic Partnership on the occasion of the 30th anniversary of the establishment of the diplomatic ties in 2022 from the current status of the strategic partnership that has lasted from 2009.

The New Southern Policy (NSP) was launched by the South Korean government in 2017 and the NSP Plus was announced by President Moon Jae-in at the 21st ASEAN-ROK Summit on November 12, 2020.

Under this pillar, South Korea has initiated new negotiations for free trade agreements and launched an official development assistance (ODA) strategy aimed at six NSP partner countries. The cooperation with Vietnam has outpaced attention to most other ASEAN member states, according to Kathryn Botto, a senior research analyst in the Asia Program at the Carnegie Endowment for International Peace.

Dr. Duong Quang Thong from the University of Economics Ho Chi Minh City attributed the rising inflows of South Korean investment to their acknowledgment and understanding of Vietnam’s business environment, better than those of other countries.

Meanwhile, the French Institute of International Relations (IFRI) said Vietnam is geographically close to Korea, and it has a robust Korean community, with 7,000 Korean companies and 200,000 Korean expatriates. Moreover, Vietnam has many favorable conditions for manufacturing industries, including qualified and cheap labor, good infrastructure, and well-developed industrial zones. 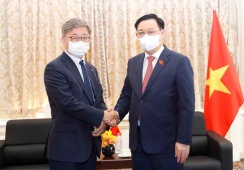