The local government has worked with representatives of foreign-invested companies before making the suspension decision.

Vietnam’s northern province of Bac Giang has halted operations of four industrial parks that house 504 enterprises from May 18 until further notice due to widespread transmission of novel coronavirus.

Dinh Tram, Quang Chau, Van Trung, and Song Khe-Noi Hoang industrial parks (IPs) that employ around 136,000 workers are closed to curb the pandemic that has affected some foreign-invested companies and left more than 400 Covid-19 infections in the locality.

On the same day, Bac Giang also put Viet Yen district and part of Yen Dung district on lockdown. Viet Yen is home to roughly 100,000 workers from 57 cities and provinces, accounting for one third of the district’s population.

The suspension of the IPs is aimed to stamp out the transmission that cause more than 400 Covid-19 infections (F0), and put about 6,500 people who had contact with the confirmed cases (F1), and more than 30,000 people of in-person interaction with F1 under different level of isolation.

Regarding the closure of IPs, Bac Giang’s authorities on May 17 worked with representatives of the companies in the IPs before making the decision.

A number of companies disagreed with the local government’s decision, but many others supported the plan, saying that the temporary shutdown will help stamp out the outbreak.

A representative of Jufeng New Materials Vietnam Co., Ltd in Quang Chau IP said the suspension is the most effective way in containing the pandemic and businesses should stand shoulder to shoulder with the local government for the common good, Bac Giang newspaper reported.

Le Anh Duong, chairman of the Bac Giang People’s Committee, said the province has prioritized the safety of residents and workers and its decision are all for the sake of companies in the long run. “The pandemic has never been as serious as it is now,” he exclaimed.

Local authorities said working in such a situation is at risk of being infected. It’s necessary to suspend the operations for one or two weeks to curb the pandemic, which is really concerning in Quang Chau IP.

Testing is the best measure for Bac Giang in the fact that the pandemic is at a large scale, Minister of Health Nguyen Thanh Long said in a working trip to Bac Giang on May 18.

Bac Giang has taken nearly 300,000 samples but only half given results. The province plans to test all workers and residents in affected areas for the second time within this week.

Health Minister Long said the ministry is also providing surgical masks and personal protection equipment (PPE) for the locality in the spirit of making maximum support as required by the prime minister. 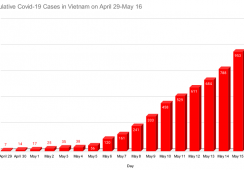