This is not the first time that a product of Chinese origin containing the nine-dash map is detected.

A Chinese imported Volkswagen SUV car model Touareg CR745J using navigation app with controversial nine-dash line map that was in display at the 2019 Vietnam Motor Show last week would be confiscated, according to the General Department of Vietnam Customs (GDVC).

The navigation app that wrongly demonstrates Vietnam’s sovereignty in the South China Sea is subject to removal from the car, said the GDVC in a statement on November 4.

The result of the punishment would later be reported to Prime Minister Nguyen Xuan Phuc, stated the GDVC, adding it would suggest the Ministry of Transport to check navigation apps installed in import cars as part of quality control process in the future.

The GDVC’s conclusion was different from its previous statement that a highest punishment in form of destroying the car is on the cards.

With such measure, the car is now considered a public asset, and given the current market price of VND4 billion (US$171,800) in Vietnam, a destruction of the car would be a waste, said the GDVC.

Last Sunday, a visitor to the motor show noticed the nine-dash line map in the navigation app of the car.

The vehicle was imported earlier this month from China for display purposes only and was scheduled to be re-exported next February, according to Vietnam Register’s records.

Last week, the Vietnam Register ordered a Vietnamese car dealership of Chinese vehicles including Zotye and Baic to remove a similar navigation map that shows the nine-dash line map.

The nine-dash line is a demarcation that encircles as much as 90% of the 3.5-million-square-kilometer South China Sea. The unilateral demarcation has been strongly opposed by the international community. Apart from violating Vietnam’s sovereignty, it overlaps with claims by Brunei, Malaysia, the Philippines, and Taiwan (China).

Dreamworks’ animation movie “Abominable” has recently been stopped from screening in Vietnam earlier this month, due to its featuring of the nine-dash line. 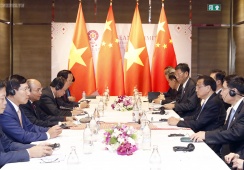 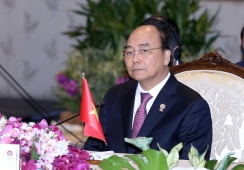