Core inflation in January picked up 0.76% month-on-month, resulting in an increase of 3.25% year-on-year.

Vietnam's consumer price index (CPI) in January saw an increase of 1.23% against the end of 2019, and 6.43% year-on-year, the sharpest growth for January in the last seven years, driven by higher pork prices and strong purchasing demand ahead of Tet, according to the General Statistics Office (GSO).

Hikes in prices of transportation, food and catering services directly led to a higher CPI in January, in which the biggest festive holiday, the Lunar New Year or Tet fell.

Ten out of 11 commodity groups, which are components of the basket for CPI calculation, witnessed month-on-month hikes in prices. Among them, food and catering services posted the sharpest increase of 2.29%, mainly due to high consumption demand for food during the Lunar New Year festival period.

The only group that saw its price down in January was post and telecommunications (-0.03%).

According to the GSO, core inflation in January picked up 0.76% month-on-month and 3.25% year-on-year.

Deputy Prime Minister Vuong Dinh Hue in a meeting on December 25 said high pork prices may push the inflation to over 4% in the first quarter of 2020, but it is still feasible for Vietnam to keep the rate below the 4% target set by the National Assembly for 2020

Hue, who is also heads the government’s Steering Committee on Price Management, added the inflation is estimated to be in a range of 3.59 – 3.91% for 2020, much higher than the rate of 2.79% of the previous year. 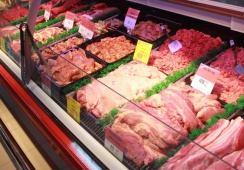