Vietnam's solar power sector holds much potential thanks to rising demand and a supportive regulatory framework.

Coupled with an increasingly supportive regulatory environment and an expected surge in electricity consumption over the next decade, Vietnam’s renewables sector is poised for a new dawn, bringing great opportunities for investors.

The outlook for growth in Vietnam’s renewables sector is positive and untapped solar power potential remains substantial, according to Daine Loh, research analyst at Fitch Solutions.

The solar segment is one of the key drivers of this impressive growth, he said.

Vietnam is set for a surge in power demand and consumption over the coming decade which largely stems from an expanding industrial and manufacturing sector, particularly as the ongoing US-China trade war plays out.

In addition, positive demographics and rapid urbanization will also further stoke electricity consumption in Vietnam, which Fitch forecasts to grow by an annual average of 6.7% between 2019 and 2028, being one of the fastest rates in Asia.

To serve the growing economic growth which is partly contributed by the manufacturing sector (accounts for nearly 17% of GDP), the government will prioritize the development of the power sector.

Renewables will offer complementary growth opportunities amid increasing environmental consciousness and pollution concerns against the use of coal.

Solar power, particularly distributed rooftop solar, is an attractive option for emerging markets to meet power demand, as it requires a shorter development time compared to thermal power projects, and has the ability to bypass some infrastructural shortfalls such as grid bottlenecks or land availability issues, Daine Loh emphasized.

Vietnam has an increasingly supportive policy and regulatory environment for the renewables sector.

Under the latest power development plan, the government aims to install 4 gigawatts (GW) of solar capacity by 2025, and 12 GW by 2030.

In an attempt to encourage foreign investment and growth in the sector, the government offers some preferential policies, attractive feed-in-tariffs (FIT) and other financial incentives such as preferential tax and duty levies.

While a proposed 20% cut to the FIT for ground-mounted and floating solar capacity in place since September could curb investor interest somewhat, the new FITs of US$70.90 and US$76.90/MWh for the two solar sub-segments respectively will remain high enough to attract investors as auctions push prices down substantially in most alternative solar markets.

The government is also looking to draft a new power development plan by June 2020, and non-hydro renewables will likely see a greater focus. 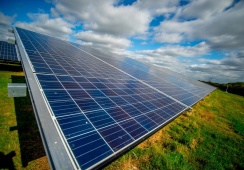