The Hanoitimes - Local health experts attributed the high ratio of convalescents (56%) to good treatment largely made through daily online consultation.

As many as 16 Covid-19 patients in Vietnam fully recovered and were allowed to leave hospital on April 10, lifting up the number of convalescents to 144 out of 257 total cases.

The latest figure raises the ratio of convalescents to 56% of the total infected cases.

On the same day, the country confirmed two new coronavirus cases, including one linked to Bach Mai Hospital, the biggest hotspot in Vietnam.

The number of infections associated with the hospital has hit nearly 50. Meanwhile, roughly 25,000 others involved have been put under quarantine, both at mass facilities and at home.

After finding Patient No.243 connected to Bach Mai Hospital, Hanoi's authorities have put a village of 11,000 people under lockdown since April 7. As of April 10, five villagers have tested positive for SARS-CoV-2.

So far, Hanoi continues to take the lead with the highest infections at 120, including 58 convalescents, while Ho Chi Minh City ranks second with 54, including 40 convalescents.

As of Friday, the number of people under quarantine hit nearly 75,000, including 720 at hospital, 24,000 at concentrated facilities, and 50,000 at home and other facilities, according to the Ministry of Health. 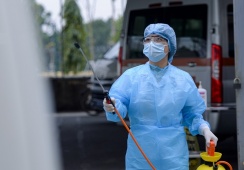 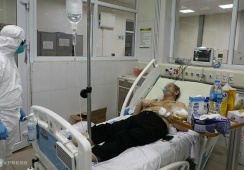 Vietnamese doctors to use plasma therapy on Covid-19 patients