The Easter holidays fall at the time of the event, making it a perfect opportunity for foreign tourists coming to experience the first ever F1 race in Hanoi and the beauty of Vietnam.

The upcoming Formula One (F1) Vietnam Grand Prix 2020 in Hanoi is expected to bring a much needed boost for the Vietnamese economy, especially in tourism sector, when the number of tourists coming to the country has fallen sharply since the outbreak of Covid-19.

Scheduled from April 3- 5 in Hanoi, Hanoi is set to make its debut on the F1 calendar as the third of a 22-race season, after the first two in Australia and Bahrain.

Vietnam would be the third country in Southeast Asia after Malaysia and Singapore to the F1 Grand Prix. It is also worth noting that the Easter holiday falls at the time of the event, making it a perfect opportunity for foreign tourists coming to experience the first ever F1 race in Hanoi and the beauty of Vietnam.

F1 posted yearly revenue of US$1.8 billion, mainly thanks to broadcasting rights, advertisement and sponsorship, while the event attracts over 506 million fans worldwide.

The average number of attendance per race in 21-round 2019 F1 season is over 200,000, according to data from F1, of which foreign tourists made up nearly 50% of spectators.

There is no doubt that foreign tourists attending the F1 race in Hanoi would  relieve pressure for tourism and also the aviation industry during the Covid-19 epidemic.

Vietnam, with its unique and diversified cultural value, would offer a series of sideline events to ensure that those coming to the country have unforgettable memories, at the same time it could be an opportunity for Vietnam to promote cultural exchanges and investment/business activities.

F1 Vietnam Grand Prix would also create a steady source of revenue for local companies, as 90% of the preparation and operation works for the event is in the hand of domestic contractors.

Notably, sponsors of the event include Heineken, LienViet Post Bank, VP Bank, MIK Group, Johnnie Walker, all come from various fields and economic sectors, which is an evidence that this is not a purely sporting event, but also the one of entertainment, fashion, and music.

Positive economic impacts for countries hosting the F1 race in the past would make it a more promising event for Vietnam.

The US Grand Prix at the Circuit of the Americas in Austin, Texas, earned US$2.8 billion of benefits from 2012 to 2015, and attracted more than 200,000 visitors during weekends racing, according to data from F1.

Since Singapore’s first Grand Prix in 2008, the country has received over 450,000 foreign tourists along with US$1.4 billion in tourism-related revenues.

Singapore’s Senior Minister of State for Trade and Industry and Education Chee Hong Tat told the Strait Times the country will continue to host a Formula 1 race as long as "the price is right" and there is "a net positive in terms of benefits to Singapore".

"F1 has been a very successful event for Singapore. It is one of our key tourism highlights. This is an important way for us to continue to make our tourism industry vibrant, by bringing in world-class events, and attracting tourists to come,” Che was quoted as saying.

A study conducted by PriceWaterhouseCoppers also revealed F1 Azerbaijan Grand Prix in Baku added up US$277.3 million for the country in 2016 and 2017.

F1 expected the Hanoi Circuit will be a truly unique racetrack that will test drivers to their limits. The circuit – a special hybrid of existing street and purpose-built sections located in downtown Hanoi – runs the length of 5,607 meters  and includes 23 turns as well as a back straight that - at 1.6 kilometer long-  will see cars hit speeds of up to 335 kilometers per hours.

“Designed by renowned track architects Tilke Engineers (Germany) in partnership with F1’s Motorsport division – a first-time collaboration – the circuit is a sign of F1’s dedication to creating tracks that deliver the best racing possible,” said F1 in a statement. F1 race will be held in most secure health service condition: Spokesperson Vietnam to go for difficult option amid Covid-19 outbreak 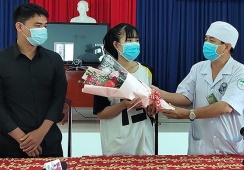