The Hanoitimes - Artisans from Chang Son fan village are paying great efforts on preserving and upholding the tradition of a Vietnam’s aged-old craft village.

The only master of an art

Chang Son village, now in Chang Son commune in the Hanoi's ourskirt district of Thach That is known as the village of making paper fans for many generations. Since the 19th century, Chang Son fans have been famous at home and abroad. The French colonialists used to exhibit Chang Son fans at the Paris World Expo in 1937.

Chang Son villager practice many handicrafts, but the most famous one is carpentry and fan making. They have been making fan for more than 200 years. Some families have been doing this job for three or four generations.

Apart from helping to relieve the summer heat, fans can be seen being put to a multitude of other users in Vietnam, including serving as sunshades, sticks, dancing props, weapon, canvases for art or poetry are simply adornment to completement the beauty of a woman.

Fan-making requires sophistication and meticulousness. It is suitable for rural people when they are in off-crop season. The process of making a Chang Son fan is also very meticulous from choosing bamboo, soaking bamboo and purchasing do paper bought from Dong Ho village in Bac Ninh province.

A master artisan must choose the right bamboo for the sticks, the best rattan for the lacing, and the right paper for making leaves. The bamboo selected must be pliable and at least three years old. It is soaked in water for about six months to protect the wood from termites and mould.

One of the most difficult steps is to stick the paper and fan frames together so that the paper would not crumple, even when the fan is folded, and it will be easier to open and close the fan later. The final step is to apply a layer of lacquer on the fan to keep it shiny, durable, and beautiful.

Chang Son village’s paper fans have long been famous for their workmanship, price and durability, and the fan trade has been a mainstay of the village’s economy for hundreds of years. The high demand for fan in the recent year is so great that most of villagers, from the youths to the elderlies are entirely devoted in fan producing, all days and nights.

Fan-making artist Nguyen Tuyet Lan is the daughter of a craftsman from Chang Son village. The artist has popularized the artistic side of fan-making and become famous for her fans, which are available in a huge range of colors, materials, sizes, styles and themes, from exquisite 25-centimeter silk fan decorated with beach blossoms to massive images up to two meter in length. The craft demands a variety of skills and the maker has to know the properties of lacquer, wood, bamboo, silk and paper as well as being able to draw and paint.

Her diversified materials are just one of the reasons why Tuyet Lan’s fans have won the favor of so many customers, and it is not unusual for Vietnamese oversea buyers to visit her own home in Hanoi to pick up fan they have ordered before they fly home.

Chang Son fans now have been exported to the UK, France, Germany, Japan, and South Korea. The trade has increased villagers’ incomes and contributed to preserving and upholding the tradition of one of Vietnam’s aged-old craft village as well as promoting Vietnamese culture internationally.

In 2010, the village was honored to create 15-meter-long fan on display on the occasion of the anniversary of 1,000 years of Thang Long Hanoi.

Nowadays, the export of the fans would promote Vietnamese culture among international friends. Its people are making every day efforts to improve the beauty of the fans in order to bring stable income for themselves and preserve their traditional craft. 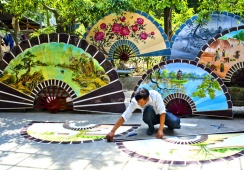