The Hanoitimes - The number of athletes from Hanoi accounted for 24.65% of the Vietnam delegation and contributed 87 medals to the total results.

Hanoi has recently held a ceremony to praise coaches and athletes from Hanoi who achieved excellent results at the recently-concluded SEA Games 30 in the Philippines.

Accordingly, the coaches and athletes were awarded a total amount of cash prizes worth VND6.2 billion (US$267,500).

The Hanoi athletes forming the national delegation competed in 31 sports in SEA Games with the spirit of unity and great determination to help Vietnam collect as many as 288 medals.

The number of athletes from Hanoi accounted for 24.65% of the Vietnam delegation and contributed 87 medals to the final medal tally, the highest number earned by a locality nationwide, including 34 gold, 27 silver and 26 bronze medals, Director of the Hanoi Department of Sport and Culture To Van Dong said.

On behalf of the Hanoi sports delegation, player Pham Hai Yen from the Women Football team thanked the Hanoi sports authorities and pledged to continue training hard to promote the position of Vietnam in the world’s sports rankings.

Hanoi is focusing on building resources for high-performance sports to compete in regional, continental and world competitions.

The city is planning for the hosting of two significant sporting events including SEA Games and Para games and relevant sideline activities in 2021. 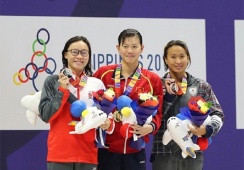