Cancellation and postponement of these sport events if the Covid-19 pandemic could not be put under control is the final scenario made by the capital city.

Hanoi Department of Culture and Sports has announced three scenarious for the 31st Southeast Asian Games (SEA Games 31) and 11th Southeast Asian Para Games (Para Games 11) to ensure safety for all participants amid the Covid-19 pandemic.

The first scenario is that SEA Games 31 will take place on the assumption that the pandemic would be put under control worldwide, Covid-19 vaccine be mass produced and the world’s economy on the recovery track. In this scenario, Vietnam would face certain challenges such as poor sponsorship after a long period of the disease impacts on the economy.

The second scenario is the inverse of the previous one. Presuming that Covid-19 would be still raging, pandemic prevention measures including medical check and quarantine will be applied. The organization of the event would face enormous difficulties. Every one must be on high alert on Covid-19 prevention.

The final scenario is the cancellation and postponement of SEA Games 31 if the Covid-19 pandemic could not be put under control.

The department said that all preparations for the 31st Southeast Asian Games (SEA Games 31), which is slated to transpire in Hanoi and surrounding localities from November 21 to December 2, have been carried out as scheduled.
As many as 11 countries in the Southeast Asian region are expected to attend the sporting events, the largest of its kinds in the region.

Amid the severe Covid-19 impacts, Hanoi would strive its best for the successful organization of the major sporting event, which demonstrates solidarity, friendship and understanding among peoples in the Southeast Asian region, Director of the Hanoi Department of Culture and Sports To Van Dong said.

He noted that while the world is facing unprecedented challenges from the Covid-19 pandemic, Hanoi and other provinces are putting up efforts to complete the preparation works.

The SEA Games 31 is projected to feature 36 sports, two-thirds of which are sports included in the official competition programs of Olympic and Asiad Games. The regional countries can propose additional sports according to the regulation.

This is the second time Vietnam hosted SEA Games. The previous one was in 2003 when the country organized the 22nd SEA Games at the My Dinh National Stadium.

The Hanoi People's Committee will take responsibility for building plans for the opening and closing ceremonies of the SEA Games and ParaGames as well as sideline activities. 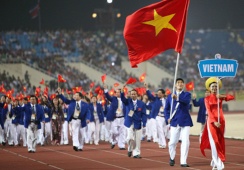