Half of the city’s parliament seats are appointed by the central bodies and the remaining proposed by the local authorities.

The city also nominated 190 candidates for the municipal People’s Council for the 2021-2026 term.

The nomination was complete at the first consultation meeting held in early February by the Vietnam Fatherland Front – Hanoi.

The nomination is aimed to select 29 lawmakers (including 14 chosen from candidates of the central bodies and the remaining proposed by the local administration) for the National Assembly (NA) and 95 representatives of the People’s Council.

Regarding nominees for the parliament, 35% of them are women and 65% are men.

There are 2,091 candidates for 1,054 representatives of the People’s Council at district level while the figures at grassroots level are respectively 21,342 and 10,814. 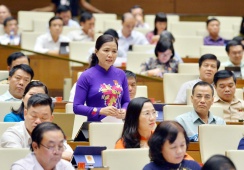