The Hanoitimes - A cold front arriving during the first days of the Lunar New Year will cause rain in North Vietnam, including Hanoi.

The weather in Hanoi is expected to turn cold during the upcoming Tet celebration from January 24 to 31, according to the National Center for Hydro-meteorological Forecasting (NCHMF).

The NCHMF said that a cold front arriving during the first days of the Lunar New Year will cause rain and shower in the North of Vietnam, including Hanoi. It will be cold at night and early in the morning.
The highest temperatures will be around 18-21 degrees Celsius, while the lowest will be about 13-16 degrees Celsius on the first and second days of the Lunar New Year (January 25-26), along with drizzle.
From January 27 to 29, it will be drizzling at night and in early morning while during daytime there will be no rain. The weather will be cold, with temperatures ranging between 14 and 22 degrees Celsius.
Tips for Tet holiday in Hanoi
Visitors coming to Hanoi during Tet holiday are fortunate because there will be numerous festivals as well as special dishes exclusively available in Tet to explore.
It is advisable to arrive in Hanoi approximately a week before Tet to enjoy the bustling atmosphere here, when people rush to prepare for Tet and witness the beauty of thousands of species of flowers and trees in the city's flower markets.
From the 5th day of the first month of the lunar calendar, a wide range of folk festivals will be held in Hanoi and its outskirt area including Dong Da festival, Lieu Doi wrestling festival, Giong Temple festival and Co Loa Temple festival.
Hanoi’s streets are expected to be deserted from evening of the last day of the Year of the Pig to the third day of the Year of the Mouse (2020) which would be the best chance for contemplative travelers to enjoy its silent beauty with a camera. However, the downside of it is that there will hardly be any store or restaurant open during these days. 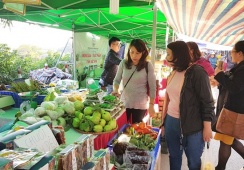 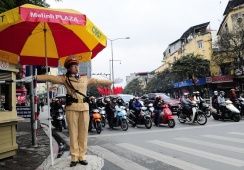