The Hanoitimes - As of February 24, Hanoi has one suspected case Covid-19 infection, while three others coming back from virus-hit areas are being quarantined.

As Covid-19 infections soar globally, Hanoi’s authorities are stepping up efforts to screen foreigners residing in the capital to prevent potential spread of the epidemic.

Vice Chairman of Thanh Xuan People’s Committee Le Mai Trang said around 1,600 South Koreans are living in the district, while the authority is clarifying each individual’s time of arrival.

In case passengers come from coronavirus-hit areas, they would be subject to quarantine in 14 days. As of February 23, there were 10 cases being monitored at home in Thanh Xuan district, Trang informed.

Meanwhile, Chairman of the Ba Dinh People’s Committee Ta Nam Chien said under the instruction of Hanoi People’s Committee, the authority has compiled a list of foreigners and their health status in all 14 wards in Ba Dinh district, particular those from South Korea and Japan.

“There are 1,036 South Koreans and 741 Japanese residing in Ba Dinh district, all of them are being monitored,” Chien stated.

In Ha Dong district, as of February 24, the locality is tracking health status of 108 suspected cases, of which 107 have now been declared negative with the Covid-19. To date, 883 foreigners are living in Ha Dong district, including 136 Chinese, 291 South Koreans, 57 Japanese, 32 Taiwanese, 24 Hongkongers, nine Thais and 334 from other countries, but none is from Italia, Singapore and Iran.

Meanwhile, in Cau Giay district, three cases coming from coronavirus-hit areas are being isolated, including one in Yen Hoa commune, one in Dich Vong Hau and one in the National Hospital for Tropical Diseases, in addition to 18 being quarantined at home.

Nguyen Duc Vien, head of the Health Division of Cau Giay district, said they are monitoring 5,876 foreigners, including 409 Chinese, 3,064 South Koreans and 32 Singaporeans.

On February 24, police of Hoan Kiem district and medical staff inspected accommodation facilities and hotels in the locality to ensure their compliance with anti-virus preventive measures.

Statistics revealed the number of foreigners staying in Hoan Kiem district, which houses numerous tourist attractions in the city, has fallen 60% year-on-year as of present. To date, around 10,065 foreigners are staying in the district, and most of them are from European countries.

Official data from the municipal Health Department revealed Hanoi currently has one suspected case of Covid-19 infection in Soc Son district as of February 24, following days without any suspected cases in the capital. 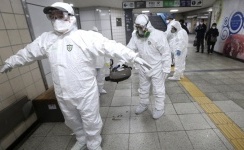 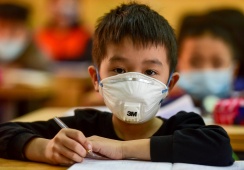 Hanoi gives a hand to enterprises affected by Covid-19