The Hanoitimes - Hanoi’s air quality index (AQI) measured at 10 monitoring stations in the city was in the range of from 122 to 186.

Air quality in the latest 24 hours in Hanoi hit the bad level in five areas, worsened to the very bad level in the remaining locations and saw no improvements, according to the Hanoi Agency of Environmental Protection (AEP).

On December 1 afternoon, the AEP said that Hanoi’s air quality index (AQI) measured at 10 monitoring stations in the city was in the range of from 122 to 186.

Compared to air quality a day earlier, Hanoi’s AQI did not improve, the index has increased significantly, with the highest readings recorded at Minh Khai (186), Pham Van Dong (178), and Hang Dau (174).

Other areas had AQI below 150 such as Hoan Kiem, My Dinh, Tay Mo, Tan Mai. The area with the lowest reading was Kim Lien (122). 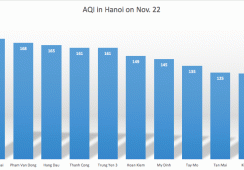