New US Embassy headquarter in Hanoi - a symbol of bilateral relation

The new embassy building demonstrates the partnership and friendship between the US and Vietnam, said the outgoing US Ambassador to Vietnam Daniel Kritenbrink.

The new headquarter of the US Embassy in Hanoi will be a symbol of bilateral relations between Vietnam and the US.

Outgoing US Ambassador to Vietnam Daniel Kritenbrink made the comment while bidding farewell to the Chairman of the Hanoi People’s Committee on April 8. At the meeting, Kritenbrink said the local authorities' agreement on the project is one of his proud achievements during his term in Vietnam.

“I think this will be one of the most beautiful embassies in the world, which will clearly demonstrate the partnership and friendship that we built with Vietnam,” said Kritenbrink.

Kritenbrink mentioned the second US – North Korea summit in 2019 in Hanoi as a showcase for the progress in Vietnam – US relations and an opportunity to promote the image of Vietnam’s capital city among international friends.

The US Ambassador also stressed Hanoi’s donation of medical equipment and facemasks for American people during the Covid-19 pandemic has significant meaning, while expressing his optimism for the future of bilateral relations.

Sharing his affection for Hanoi, Kritenbrink said “Vietnam and Hanoi in particular will always have a special place in my heart, and I will never forget the generosity of the people in Hanoi.”

As his term is coming to an end, Kritenbrink expected his successor would continue to maintain the close cooperation between the US Embassy and Hanoi’s authorities.

Chairman of the Hanoi People’s Committee Chu Ngoc Anh thanked Kritenbrink for his efforts in improving the two countries’ relations, adding there has been strong progress over the years.

Anh hoped Kritenbrink in his new position would further contribute to the two sides' bilateral relations. He said: "Local authorities will continue support for the construction of the new US Embassy in the city." 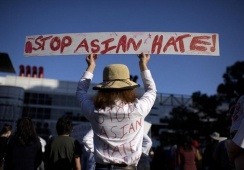 US Congress urged to stop discrimination against Vietnamese-Americans 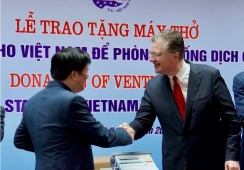 US finances Vietnam US$13 million in Covid-19 fight