Cambodian and Laotian prime ministers are the first foreign leaders that the Vietnamese PM talked with.

Vietnam’s newly-elected Prime Minister Pham Minh Chinh on April 6 received phone calls from his Cambodian and Laotian counterparts, the first having conversations with him since his inauguration one day earlier.

At talk with Cambodian PM, Chinh emphasized on strenghtening the multifaceted cooperation that was reached by the two countries’ leaders.

The two PMs agreed to exchange experience in the fight against Covid-19 and boost the cooperation in border areas to both prevent the spread of the pandemic and keep crossborder goods flowing.

Chinh invited Hun Sen to visit Vietnam at the convenient time and the Cambodia PM gave the same invitation to the Vietnamese counterpart.

In the videoconferencing talk with Laotian PM, Chinh highlighted the “great” friendship and the comprehensive partnership between the two countries, enhancing the cooperation to better deal with common challenges.

Both the PMs exchanged the invitation to each country in the near future.

The Vietnam-Laos relations is called “special”. Lao media reported: “The bilateral cooperation ties in politics have climbed to new heights witnessed by the regular exchange of high level visits of leaders from the two parties and governments.” 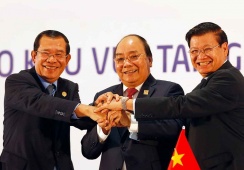