Malaysia is the latest country following Indonesia, Australia and Vietnam to express concern about China’s steps that have heated up the South China Sea.

Malaysia has hardened its diplomatic position on the South China Sea, questioning China’s “nine-dash line” claim over the entire sea lane that has already been previously declared as having “no legal basis” by an arbitration tribunal in The Hague.

“For China to claim that the whole of South China Sea belongs to China, I think that is ridiculous,” Malaysian Foreign Minister Saifuddin Abdullah said in response to an Al Jazeera question.

This was in response to China’s protests against Malaysia’s new submission sent to the UN to clarify the outer limits of Malaysia’s territory in the South China Sea, as there are ‘potential overlapping entitlements’ beyond its own ‘exclusive economic zone’ (EEZ).

On December 12, Malaysia formally filed a submission seeking clarity on the limits of its continental shelf beyond the 322 kilometers (200 nautical miles) exclusive economic zone (EEZ) in the sea which is also claimed by several countries in Southeast Asia.

The move has angered China, which claims “historic rights” over all of the South China Sea. It has also blamed the United States for raising tensions in the area.

This is not Malaysian first claim to the area; back in 2009, a joint Malaysia-Vietnam claim was launched to expand the outer limits of the two countries’ maritime area, to which China responded that they have ‘historical rights’ to the area.

Earlier this month, Australia and Indonesia jointly declared “serious concerns” about the state of the South China Sea, issuing a warning about China’s militarization in the sea and urging adherence to international law.

The joint statement was released following the annual meeting of the countries’ defense and foreign ministers. It underscores ongoing regional anxiety about the Chinese government’s efforts to consolidate its claims in the sea.

It outlined “concern at the continued militarization of disputed features” and called for claimants to avoid actions that risked escalating tensions, according to the Sydney Morning Herald.

The ministers also said a code of conduct (COC) – the subject of years of discussions between China and the Association of Southeast Asian Nations (ASEAN) – must be “substantive” and consistent with international law and “not prejudice the interests of third parties”.

Hanoi has strongly protested Chinese aggression in the South China Sea, including the maritime survey within in Vietnam’s exclusive economic zone (EEZ) for almost four months beginning in July. Seriously, China’s militarization in features in Vietnam’s Hoang Sa (Paracel) islands has escalated tensions in the region.

The South China Sea issues were put in the agenda of the month-long sitting of the National Assembly (NA) beginning in October.

Prime Minister Nguyen Xuan Phuc said on the same occasion that the government will set military enhancement one of three main duties that his cabinet will conduct in 2020.

At the 11th plenary session of the Party Central Committee in September, General Secretary of the Communist Party of Vietnam and State President Nguyen Phu Trong called on the country to be ready for all possibilities in its territorial waters.

Meanwhile, a number of Vietnamese lawmakers urged the NA to take a resolution on the South China Sea issues which have become tense recently due to Chinese aggression, saying that it’s time for the NA to show its clear attitude towards any issue relating to the national sovereignty as its role is to represent the people nationwide.

In 2016, the Philippines challenged the nine-dash line at the Permanent Court of Arbitration in The Hague, arguing that the line exceeded marine entitlement limits dictated by the UN Convention on the Law of the Sea (UNCLOS). The court ruled in favor of the Philippines, stating that China had ‘no historical rights’ based on the nine-dash line map. 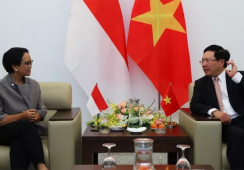