The effort of an oversea Vietnamese sommelier in introducing local culinary to the world.

Currently, he lives and works in the field of restaurant management in Milano, Italy. Over 10 years of settling down in Italy, he has always been passionate about culinary discovery and inspired others about cuisine. The talent sommelier talks to Hanoitimes about the passion of his life.

What made you become a professional Sommelier in Asia Pacific and now in Italy?

I studied and graduated from Food and Beverage major. During my study, I was trained by many domestic and foreign experts through participating in national and international competitions. I also have accumulated a lot of experience through work at large hotel groups as well as a five-star cruise which sails around Asia.

Thanks to those opportunities, I have learned many different culinary cultures and tasted different wines. This helps me easily recognize and differentiate the tastes of different kinds of wine. No matter where I work, I always have passion which determines the success or failure of a person in his/her career, I think.

In your opinion, how is the country’s image and culture shown through the culinary style?

Cuisine is an extremely rich and diverse topic. Each country, each city and even each place in that city has its own dishes and drinks as well as culinary culture, creating a huge culinary map of the world. However, each country has its own national dishes that characterize the country, such as Pho (Vietnamese traditional noodle soup) and Banh mi (Vietnamese sandwich) of Vietnam, Padthai or Tom Yam Kum of Thailand, Nasi Goreng of Indonesia, Nasi lamak of Malaysia, Sushi and sashimi of Japan, Kimchi and Kimbap of South Korea, Spaghetti, Bolognese or Pizza from Italy, Kebap of Turkey, among others. Obviously, all dishes can more or less describe the weather, country as well as the  identity of a country.

As a Vietnamese, how do you rate Vietnamese cuisine and what Vietnamese dishes do you love? According to you, how to bring Vietnamese food to the overseas table?

I am always proud of Vietnam’s cuisine. There are many Vietnamese delicacies that are honored in the top 10 dishes of the world such as Pho, Banh mi, Nem (fried spring rolls), goi cuon (fresh spring rolls), among others. The special feature of Vietnamese cuisine is the fresh and rich ingredients from many regions, especially herbs and spices. Moreover, the way we combine them together contributes to make the dishes unique.

In addition, we have an intersecting culture with China, Laos, Thailand, France, among others, which makes Vietnamese cuisine easier to integrate and be favored by international friends. Personally, I really like the dishes like pho, bun bo Hue (beef noodle soup), salad and a number of different grilled dishes from three typical regions.

To bring Vietnamese food increasingly closer  to international friends, in my opinion, each of us as well as the Vietnamese community living all over the world  should join  hands to promote Vietnamese cuisine.

Do you see any similarities between Vietnamese and Italian culinary styles and do you think about combining them to create new dishes?

Vietnamese and Italian cuisines are quite similar in terms of ingredients. Raw materials are fresh, delicious, and diversified by seasons and regions from the seaside to the mountainous areas. The people from the South of Italy also likes spicy food.

Meanwhile, Vietnamese starts to pay attention to olive oil and wine. Vietnamese dishes can completely combine well with wines in general and Italian wines in particular. 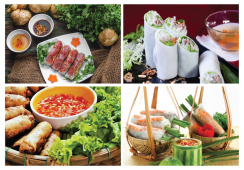