"The song of unity" forever resounds

The Hanoitimes - The documentaries and items on display at "The song of unity" exhibition will help visitors to learn about important historical milestones of the Vietnamese Communist Party.

The exhibition entitled "The song of unity" is on display from January 8 to February 28 at Hoa Lo prison on the occasions of the 13th National Party Congress and the 91st founding anniversary of Vietnamese Communist Party (February 3, 1930 - February 3, 2021).

The image of Uncle Ho directing the orchestra singing the Unity song taken by photographer Lam Hong Long in 1960 is the highlight of the exhibition underway at the historical relic of Hoa Lo prison, which is divided into two parts called "The imprint of the countryside" and "Under the glorious Party flag".

"The imprint of the countryside" is a display of documents and items related to the farmers, the great contributors to the revolution. The display area on Dong My commune in Thanh Tri district, Hanoi is a focus of the exhibition as this was the place where the Party Branch of Dong Phu was established (the first Party cell in the rural suburbs of Hanoi).

In addition to Hanoi, the exhibition also introduces touching stories about the people and other lands such as Vo Liet Commune (Thanh Chuong District, Nghe An Province) - the famous place where the Soviet - Nghe Tinh movement erupted in 1930 and 1931.

Reminiscing the glorious history of the Party Congress

The second part of the exhibition called "Under the Glorious Party Flag" dealt with the post-war period when the Vietnamese people overcame the war consequences to rebuild the country.

At the exhibition, visitors will have the opportunity to view documents and artifacts about the party congresses throughout history, meet witnesses and hear their stories to gain a comprehensive understanding of the sacrifices and dedications of previous generations for the survival and development of the nation.

Attending the opening ceremony of the exhibition, Mr. Pham Xuan Hop from Dong Da district, Hanoi shared: “When looking at the displaying photos and documents at the exhibition, I still feel the thrilling atmosphere of 60 years ago, when Hanoian gathered at the Botanical Park to celebrate the 3rd National Party Congress."

"I cannot forget the moment when Uncle Ho stood on the command podium, conducting the rhythm of "The song of unity” to the orchestra. Later on, the image has become one of the symbols of the national solidarity spirits,” Mr. Hop. 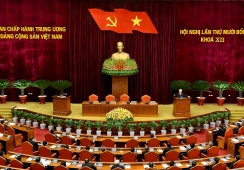 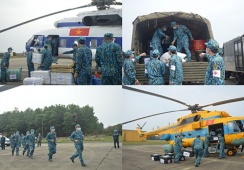