US–China Cold War: Is it a real possibility?

The Hanoitimes - Despite their conflicting strategic and core interests, the possibility of direct military confrontations or "hot war" could be discarded because that would be catastrophic for both.

China's accusations sounded harsh, high-pitched and rare in the chosen language. But such accusations surprised no one considering the current state of the US–China bilateral relationship. China accused the US of triggering a "new Cold War" against it. And the person on the Chinese side who made such public accusations against the US was none other than the Chinese State Councilor and Foreign Minister Wang Yi personally. It's not fake news or reported news. Wang himself told Chinese and foreign press in Beijing.

This “Cold War” notion has its own historical weight. It denoted a very special period in world history. It involved meanings such as ideological and military confrontation and enmity, uncompromising competition for political systems and values. It was the confrontation in the last century, mainly between the US and the then Soviet Union. Thus, the Chinese accusations reflect China's assessment of the current situation in the bilateral relationship with the US, which is not only at the lowest level since its establishment many decades ago, but also bode profound changes in the real nature of this relationship, from bilateral strategic competition to bilateral strategic confrontation.

Behind Wang Yi's performance in front of the media, there was China's deterrence message to the United States and some hints of China's fears of intensified attacks by the United States in the coming days. Obviously China is now trying to prevent the Donald Trump administration from playing its so-called "China Card and Trump" to secure Trump's victory in the presidential election in November.

China and the US are clashing over many issues like trade dispute, US support for Taiwan, human rights, Hong Kong, WHO, China's dealing with the coronavirus pandemic, China's activities in the East Sea, internationally known as the South China Sea. However, despite their conflicting strategic and core interests, the possibility of direct military confrontations or "hot war" could be discarded because that would be catastrophic for both, politically as well as militarily. They all know well where their common red lines should be drawn. They wouldn't trigger any kind of the known Cold War either because it would throw their relationship back into the past, or because it would be a Cold War none of them could win while many others could take advantage of it. That is why China's accusations against the US were, in fact, no less accusations than warnings to the US. 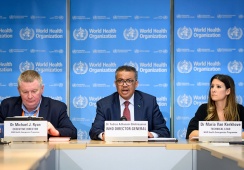