Vietnam - An economic miracle in Asia

Recent years have seen growing reputation, prestige and presence of Vietnam in the international arena.

After 75 years of Independence under the leadership of the Communist Party, Vietnam has been thriving to become a key player in Southeast Asia with constantly developing social, culture, improved commercial and spiritual life and stable politics. Recent years have seen growing reputation, prestige and presence of Vietnam in the international arena.

Seventy-five years ago, at this very moment, the streets of Hanoi were witnessing a most vibrant atmosphere. With the aspiration for independence and freedom, Vietnamese people have risen to reclaim independence. The oath for Independence echoed in the hearts of each and every one of Vietnamese as the then President Ho Chi Minh read the Declaration of Independence on September 2, 1945.

Over the past seven decades, Vietnam has expanded its foreign relations towards multilateralism and diversification; proactively and actively integrating into the world; acting as a trusted friend and partner and a responsible member of the international community.

The year 2019 witnessed a new milestone in Vietnam's achievement for second time winning a seat in the Security Council of the United Nations with 192 supportive votes out of total 193. This is so far considered as one of the largest victory in the history of the United Nations. Vietnam is also Chair of Asean in 2020 - the first time it has held the two positions at the same time. This presents an opportunity for it to take advantage of bilateral relations with other countries and create new momentum for enhancing its role and profile.

The World Bank (WB) assesses that Vietnam has a stable business environment and has achieved positive results in improving business environment in the past decades. Business Report 2020 of WB ranked Vietnam as 70/190 of world economy (increasing 20 grades than in 2010); Vietnamese Paying Taxes ranks 109/190 of countries and territories (up to 22 grades than in 2018); at the same time, the Vietnamese economy is assessed to make continual and positive progress in the coming years, thanks to improved access of credit information via providing data to users from commercial banks and upgrading tax collection system as well as attractive business environment (in 2019, foreign direct investment committing to invest in Vietnam has exceeded $38 billion, the highest level in Vietnam for the 2009-2019 period, increased by 7.2 per cent/year).

Located next to the South China Sea (called East Sea in Vietnam), Vietnam has 3,260km of coastline alongside from north to south and a vast sea area including thousands of large and small islands, including two archipelagos of Hoang Sa (Paracels) and Truong Sa (Spatlys). Vietnam is restructuring its marine economy with top priorities in developing marine and island tourism, renewable energy, biotechnology, pharmaceutical industry, maritime, exploitation of oil and gas and other minerals, fish farming and shipbuilding to adapt to climate change and promote economic growth.

The South China Sea is located on the important traffic route connecting the Pacific-Indian Ocean, Europe-Middle East-Africa-Asia. It is one of the ten largest sea lanes in the world related to the South China Sea with more than 45 per cent and 90 per cent of the world's commercial shipping volume is carried by sea and some of which must go through the South China Sea. The sea is regarded as the vital lifeblood for the transport of oil and natural resources and trade from the Middle East to China, South Korea, and Japan.

This article is reposted from the Khaleej Times. 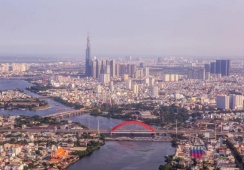 Vietnam: A bright star in Asia 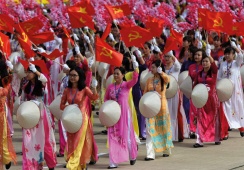