The Hanoitimes - With joint efforts from governments and parliaments in ASEAN, the bloc would be successful in building a united, strong and independent ASEAN Community for peace, stability and prosperity.

Despite many difficulties, Vietnam is determined to excel in its 2020 ASEAN Chairmanship role, according to Prime Minister and Chairman of ASEAN in 2020 Nguyen Xuan Phuc.

With joint efforts from governments and parliaments in ASEAN, the bloc would be successful in building a united, strong and independent ASEAN Community for peace, stability and prosperity, said Mr. Phuc at the opening ceremony of the 41th General Assembly of the ASEAN Inter-Parliamentary Assembly (AIPA) themed “Parliamentary diplomacy for a Cohesive and Responsive ASEAN”, which was held online from Hanoi on September 8.

According to Mr. Phuc, Vietnam has taken control of the Covid-19 pandemic and is boosting economic recovery. The country’s GDP growth in the first six months of the year was estimated at 1.8%.

Mr. Phuc said AIPA is an essential organization within ASEAN, aiming to promote the latter’s central role in the maintenance of peace and security in the region.

The Vietnamese PM said the cooperation between legislative and executive branches in ASEAN would ensure the realization of the ASEAN Community Vision for 2025 and other overall plans based on three pillars of the ASEAN namely Political – Security Community (APSC), the ASEAN Economic Community (AEC), and the ASEAN Socio-Cultural Community (ASCC).

Mr. Phuc expected AIPA members to continue advising governments in drafting the ASEAN development strategy, which puts the people at its core.

The goal of ASEAN and AIPA is to establish an ASEAN Community that respects the rule of law, equality, and settle differences based on international law and peaceful solutions.

ASEAN would continue to expand relations with other partners, in which the bloc is expected to play a central role in regional and international cooperation, Mr. Phuc added.

Previously, Chairwoman of Vietnam’s National Assembly and AIPA 41 Nguyen Thi Kim Ngan in her opening remarks said AIPA needs to join hands with governments in the fight against Covid-19 pandemic, boosting economic recovery and cooperation between ASEAN members during and post-Covid-19 period.

This is the third time that Vietnam’s National Assembly has served as AIPA Chair and hosted an AIPA General Assembly, but the first time an event of this kind was held via videoconferencing.

At this year’s event, scheduled to take place on September 8 – 10, over 380 delegates would discuss measures to enhance cooperation for ASEAN’s economic recovery in the post-Covid-19 period, equality for female workers and the participation of young AIPA parliamentarians in building ASEAN Community, among others. 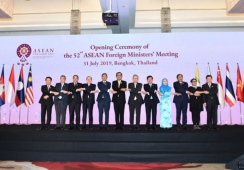 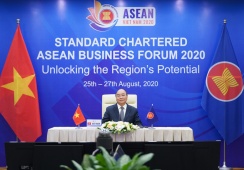