The Hanoitimes - Suga continues the predecessor's foreign policy which is based on the concept of a free and open Indo-Pacific.

It will be Suga’s first overseas trip since taking office earlier this month.

Mr. Suga would not make the final decision on whether to travel until after examining the coronavirus status at home and in the destinations. Vietnam has succeeded in containing the pandemic after going more than three weeks without locally-transmitted cases.

He is expected to focus on resuming international travel at talks with Vietnamese Prime Minister Nguyen Xuan Phuc and Indonesian President Joko Widodo.

Japan is already in talks with Vietnam about easing restrictions on business travel between the countries which have already reopened borders to expatriates.

Mr. Suga also wants to coordinate efforts with Vietnam and Indonesia regarding the South China Sea, as US-China military and economic tensions continue to heat up, Nikkei Asia reported, adding that Japan will likely try to appeal to ASEAN partners about securing regional stability in a bid to curb China’s growing regional ambitions.

The new Japanese prime minister is continuing the foreign policy of his predeccesor Abe Shinzo, which is based on the concept of a “Free and Open Indo-Pacific.” It aims to strengthen deterrence against China by advocating the importance of democracy and other values, like the rule of law.

Vietnam and Indonesia are known for their friendly ties with Tokyo and Japan has traditionally emphasized its relationship with the two Southeast Asian countries.

After inaugurating his second administration in 2012, Mr. Abe also picked up these two nations for his first overseas trip.

This year, Vietnam is ASEAN chair while Indonesia is a member of the Group of 20 (G20) major economies.

Right after the election of Japan’s new cabinet, Hanoi said it wished to enhance the relationship with Japan to take the comprehensive and substantive strategic partnership to a new height.

International experts believe that whoever succeeds Abe Shinzo, Vietnam and Japan have ample reasons to widen and deepen their cooperation across a host of domains. 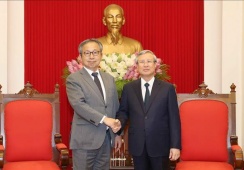