The Hanoitimes - The expo is expected to welcome the participation of defense ministers of ASEAN and its partners.

Vietnam has plans to organize an international defense exhibition for the first time later this year with the participation of foreign exhibitors, local media cited a deputy defense minister, giving no specific time of the expo.

“International Defense Exhibition, the first of its kind to be held in Vietnam, will take place on the sidelines of the ASEAN Defense Minister's Meeting (ADMM) Plus,” Deputy Minister of Defense Nguyen Chi Vinh said at the ASEAN Defense Senior Officials’ Meeting Plus (ADSOM+).

So far there has been only Vietnam International Defense & Security Exhibition (VIDSE) held by the Ministry of Public Security. This is the annual event organized since 2017.

“We would like to invite defense ministers, military delegations, and companies to participate in the event,” Vinh said at a virtual meeting held in Hanoi on July 7 with the attendance of senior defense officials of ASEAN and eight partners namely Russia, the US, China, Japan, South Korea, Australia, India, and New Zealand.

ADSOM+ was held with an aim to promote defense cooperation within ASEAN and its partners, for them to share their views on the regional and global situation amid the spread of Covid-19 as well as the response by the countries’ armies to the pandemic.

“Given some suggestions for the cooperation in military medicine, we have recommended organizing conferences and exercises against the pandemic at ADMM+,” Vinh said at the meeting on Tuesday.

ADMM and ADMM+ are scheduled to take place in October in Vietnam. “We will make all efforts to ensure safety for all delegates who come to Vietnam for the events,” he noted. 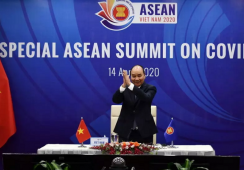 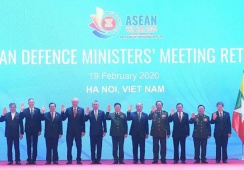