The Hanoitimes - These two titles lengthen a list of awards Vietnam has gained at global and and regional scale.

Vietnam has won two categories at the World Travel Award (WTA) held in Muscat, Oman.
At the WTA awards ceremony, Vietnam was awarded two titles in the categories of World’s Leading Heritage Destination 2019 and World’s Best Golf Destination 2019 for the first time.

According to the WTA, the recognition of Vietnam as the world's leading heritage destination reaffirms the country's efforts in the preservation of cultural heritages and boosts its status on the global tourist map.

The country is planning to develop tourism into a spearhead economic sector focusing on the preservation of cultural heritage values.

This year, Vietnam has affirmed its strength in the tourism industry with a spate of titles in the world and regional tourism awards.

In October, Vietnam was chosen Asia’s leading culinary destination at the WTA awards ceremony for Asia and Oceania and also named the world’s best golf destination 2019 at the international World Golf Awards held in the UAE.

Vietnam’s tourism industry witnessed a new historical milestone as the number of international arrivals reached a record 1.8 million in November, raising the combined number of foreign arrivals to Vietnam in January- November period to 16.3 million, accordingly the General Statistics Office.

By the second quarter of 2019, Vietnam ranked 10th among countries and territories in the world and 4th in the Southeast Asian region for receiving the highest number of arrivals from Asia and Oceania. 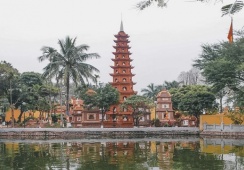 The Travel lists Hanoi among ten places to visit in Vietnam

World Travel Awards to be held in Phu Quoc next month