The “For the Poor” Foundation has received VND56.2 billion in donations since 2021.

Enterprises, individuals and organizations donated more than VND30.4 billion (US$1.27 million) in cash and in-kind for Hanoi’s “For the Poor” Foundation on October 11.

The donations were announced at the “Month for the poor and social welfare” launching ceremony in 2022 at the Friendship Cultural Palace. The particular month will last from October 17 to November 18, 2022.

At the launching ceremony, the Board of Directors of the Hanoi "For the Poor" Foundation also announced VND10.7 billion in funding for the construction of social housing and the provision of production tools for poor households.

Certificates of merit were also awarded to 17 households that made great efforts to lift themselves out of poverty. In addition, the Hanoi Fatherland Front Committee commended 30 units and 12 individuals who actively contributed to the city's poverty mitigation and social security.

Launching the “Month for the poor and social welfare” in 2022 is an opportunity to highlight individuals and organizations that have worked incredibly to help the city reduce poverty and ensure social stability, Vice Chairman of the Hanoi People’s Committee Chu Xuan Dung said.

“The event also connects poor families and disadvantaged people with the benevolence of Hanoi people, thus sharing the love among all residents and leaving no one behind,” Dung said.

The vice chairman said that Hanoi had developed sustainability policies that match the city’s socio-economic growth in specific stages and support poverty reduction activities in 2022-2025.

Due to the Covid-19 pandemic, many households have still struggled with disadvantages. Currently, there are more than 3,600 poor households in the city, equal to 0.16% of the total, and nearly 30,200 near-poor families, or 1.38% of the total.

The city has planned to curb the numbers of poor families and near-poor households by 25-30% and 10%, respectively, each year on the expectation that there will be no more poor families in 2025. Drastic solutions have been taken to improve the quality of living conditions and guarantee the fairness of development for all people of the capital city, thus stabilizing the political status and propelling socio-economic growth.

The “Month for the poor and social welfare” in 2022 will be a chance for all organizations, enterprises and individuals to show their benevolence, humanity, compassion and sharing with the poor,” the vice chairman noted.

"By providing poor and near-poor households with social houses, as well as equipping them with production methods and tools, it is believed that poor and disadvantaged people will have sufficient resources to earn a living and get out of the state of poverty soon," Vice Chairman Dung said.

“We hope the ‘Month for the poor and social welfare’ in 2022 will receive strong support from organizations, enterprises and individuals. Together, we will build a modern, prosperous and ethical capital city that loves everyone and leaves no one behind,” he said.

Nguyen Lan Huong, Chairwoman of the Hanoi Fatherland Front Committee, said that the “For the Poor” Foundation had received VND56.2 billion in donations since 2021.

The funds have financed the construction of more than 650 social housing units and the repair of 145 dilapidated houses for poor families, who have been helped to take out loans, obtain production materials and enjoy healthcare services, he said.

In addition, Hanoi has spent more than VND1.8 trillion in cash and in-kind, such as food and medical items, in preventing the Covid-19 pandemic; disbursed more than VND14 billion for the "Internet and computers for students" program, and given away more than 10,000 electronic devices for underprivileged students, Huong said. 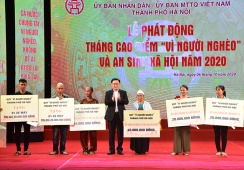 Hanoi launches “Month for the poor and social welfare”