18% of Vietnam land contaminated by bomb and mine

The one decade-long efforts help reduce 1.1% of the contaminated area only.

Up to 5.6 million hectares in Vietnam or 17.71% of the country’s total land area are contaminated by unexploded ordnance (UXO).

The contaminated area has fallen by 1.11% for 10 years now thanks to the decade-long National Mine Action Program (Program 504) that received great international support.

The program cost VND12.6 trillion (US$548 million), including VND10 trillion ($437 million) from the state coffer and the remaining are non-refundable aid from foreign donors including international organizations, individuals, and countries like the US, Japan, South Korea, the UK, Norway, Germany, Australia, Russia.

Incomplete statistics showed that from 1975, about 40,000 people have been killed and 60,000 others injured due to explosive war leftovers. On average, each year, UXO claims over 1,000 lives and leaves more than 1,300 others disabled.

“Landmines and explosives left by the war in Vietnam are a daily threat to the people, a thorny issue of the country, causing many difficulties in production and life, hindering the normal development of the country,” PM Chinh said at the event.

Program 504, therefore, is significant to Vietnam’s socio-economic development, contributing to the remediation of the war's aftermath.

To ease pain and thoroughly solve the problem, Chinh required the following missions, including making the post-war remedial work an urgent and regular task; refining the legal framework in the sector; improving the capacity of the Vietnam National Mine Action Center (VNMAC); building a database on UXO and toxic chemicals left after the war; mobilizing local and international support; striving to eliminate UXO-related accidents nationwide by 2025.

Above all, Chinh called for support from foreign governments, ambassadors, international organizations, and foreign donors for drive-in Vietnam.

Addressing the event, US Ambassador to Vietnam Marc Evans Knapper highly appreciated Vietnam’s UXO settlement experience that has been shared with the world.

He called the cooperation between the US and Vietnam in this field “extraordinary” and affirmed that the US always supports Vietnam’s sustainable development. Knapper said Vietnam has been leading in the drive all over the world and for the future that “Farmers can cultivate in the fields and parents can let their children play outside without worries.”

The US has partnered with Vietnam since 1993, investing more than $166 million in joint clearance programs. “As we responsibly address the legacies of our shared past, we look forward to a long future supporting a strong, prosperous, and independent Vietnam,” the ambassador noted.

UXO was scattered over Vietnam, Laos, and Cambodia by US bombers in the war, at three times the volume of ordnance dropped in World War II, according to Project Renew, a non-governmental organization located in Quang Tri province, Vietnam.

In June 2019, staff at the US Congressional Research Service (a department within the Library of Congress) sent legislators an analysis of the $400 million the US has spent on UXO clearance in Southeast Asia, VOA reported.

It said the cleanup will probably involve several more decades and probably casualties. These human and dollar costs, as well as the long time that war legacies have lasted, are factors for legislators to consider. 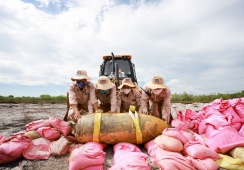