Vietnam's domestic economic rebound continued, albeit not yet at the pace of the pre-crisis level, stated the World Bank.

While the Covid-19 resurgence and subsequent stringency measures will certainly impact the pace of recovery of Vietnam’s economy, such the negative impact might be partially compensated by the government’s efforts to accelerate the execution of its investment program, according to the World Bank (WB).

Prior to the recent Covid-19 outbreak in Danang and other localities, the domestic economy continued its rebound with the industrial production index (IPI) up 2.5% year-on-year in July. The rate of expansion was nonetheless slightly lower than the reported in May and June.

Similarly, retail sales of goods and services continued to recover, growing by 4.6% year-no-year. Both manufacturing and retail sales reported year-on-year growth rates lower than their respective growth rates in June 2019, indicating that the economy had not yet fully bounced back to its pre-crisis activity levels, stated the WB in its Vietnam’s economic report.

In July, Vietnam was able to maintain its merchandise trade surplus with a monthly surplus of US$1.6 billion, yielding a surplus of US$9.4 billion for first seven months of 2020, up from US$3.3 billion over the same period in 2019.

The value of total exports slipped 1.4% compared to June 2020 but is comparable to July 2019. Exports performance of the domestic economic sector shows stronger signs of recovery (up by 10.6%) while foreign owned exporters suffered a decline in the sales of approximately 5% compared to one year ago.

While most destination markets declined, increases were reported for the US, EU and Japan in July. Overall import values increased 2.0% compared to June 2019 but are still about 3.6% lower than in July 2019.

Meanwhile, international tourist arrivals to Vietnam in the first seven months of 2020 is estimated at 3.76 million, down 62% year-on-year.

Foreign direct investment (FDI) flows into Vietnam strengthened in July compared to May and June. However, overall FDI commitments declined by 7% year-on-year during the first seven months of 2020 compared to the same period of 2019.

According to the WB, the surge observed since end April capture the stronger interest of foreign investors in Vietnam, which, by being ahead of the Covid-19 curve and being located next to China, may take advantage of the revamping of global value chains and the ongoing effort by multinational to diversity their risks.

The year on year rate of change of credit to the economy fell steadily since February, dropping to 9.3 % year-on-year in June. This rate, though historically low, is still several times higher than the GDP growth rate. It reflects the easing of monetary and credit conditions by the State Bank of Vietnam (SBV) to support vulnerable firms. While justified, such policy should be carefully watched at it has reduced bank’s margins in an environment where the rate of delinquent loans has already increased rapidly, the WB suggested.

In line with its objective to raise public investment as a stimulus to economic recovery, disbursement was estimated at total VND45.7 trillion (US$1.97 billion) in July, representing a rise of 51.8 % against the same period last year.

Over the first seven months of the year, total disbursement of public investment reached VND203 trillion (US$8.74 billion), equivalent to 42.7 % of the plan for the full year and up by 27.2 % over the same period in 2019. After several months of slow activity on the domestic capital market, the State Treasury raised more than VND58.67 trillion (US$2.5 billion) in July, up by 80% against June.

Overall, the WB’s report urged greater attention will need to be paid to the growth and fiscal impacts of the crisis and policies to redress them in the medium to long term. 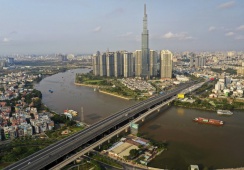