On the day, a town of 7,600 people in North Vietnam was placed under lockdown.

April 22 marked the sixth straight day without Vietnam reporting new coronavirus cases, keeping the tally at 268, and no deaths have been confirmed so far.

The number of convalescents has reached 223 as of April 22, accounting for 83% of the country’s total infections, statistics by the Ministry of Health showed.

At present, 45 active cases are under treatment at nine medical stations nationwide, of whom three, including a British national, are in critical condition.

On the day, the northwestern province of Ha Giang put Dong Van town on lockdown six days after a Covid-19 patient was confirmed. The town of 27,500 hectares with 7,600 people will be shut for at least two weeks.

The Covid-19 patient from Ha Giang is a 16-year-old H’mong girl who is believed to be infected SARS-CoV-2 from her brothers who went to work in the neighboring country of China.

Ha Giang has identified 917 people who are linked to the patients, 252 of them are in mass quarantine and 665 under self-isolation at home. Notably, 20 medical workers and 15 border guards are involved, according to local authorities. 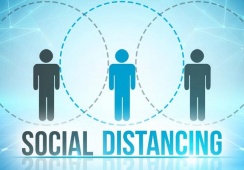