ASEAN: 55 years of unification and development

ASEAN has become the world's most successful bloc developing based on three pillars: politics-security, socio-culture, and economics.

Celebrations marking 55 years of the foundation of the Association of Southeast Asian Nations (ASEAN) were solemnly held on August 8 across the nations, underscoring a harmonious ASEAN community.

The community, which is peaceful, stable, and prosperous, supports ASEAN's engagement with the broader region, and the region's responses to the impacts and uncertainties caused by regional and global challenges.

For the past five decades, ASEAN has become one of the world’s most successful blocs thanks to three pillars namely maintaining a region of peace, stability, and security for decades; developing on a three-pillar direction: politics and security, socio-culture, economics to become one of the fastest-growing regions with GDP of US$3.3 trillion in 2021; being the regional center and prestigious with a wide network of partners.

It's the foundation for ASEAN to fulfill its 2025 Vision which will build a successful ASEAN Community.

The establishment reflects the desires of many Southeast Asian countries for peace, stability, friendship, cooperation, and development. It is the ASEAN way that has helped its member countries navigate turbulent times in the region and around the world. ASEAN's regionalism has matured over time, and its role in multilateralism, particularly since the Association has deepened and expanded its relationships with outside partners.

On this occasion, Vietnam’s Foreign Minister Bui Thanh Son shared some reflections on the bloc and Vietnamese contributions to the nations. He said ASEAN reflects ‘One Vision, One Identity, One Community’ from a group of Southeast Asian nations divided by wars.

Overcoming the vicissitudes of time and adapting to the changes in the region and the world at large, ASEAN has been growing consistently and perfecting itself on multiple fronts.

In 1997, for the first time ever, ASEAN adopted the ASEAN Vision 2020 on a community “cohesive in shared identity,” satisfying the aspirations of the member states for a Southeast Asian region “where rivers and mountains no longer divide but unite us in friendship and cooperation.” In particular, the formation of the ASEAN Community in 2015 with three pillars of security-political, economic, and socio-cultural has raised the process of cooperation and regional linkage to a new height for peace, cooperation, and mutual prosperity.

As a result, ASEAN has affirmed its prestige, position, and central role, expanding substantive and deeper relations with its partners, and winning extensive and practical international support to promote the development and integration of ASEAN.

To date, ASEAN has a dialogue partnership with 11 important countries and international organizations including Australia, China, the US, Russia, Japan, Korea, India, and the EU. Many stances and regulations of ASEAN such as the ASEAN Charter and the Treaty of Amity and Cooperation (TAC) are welcomed and embraced by the international community.

ASEAN has been consistently growing and perfecting itself on multiple fronts, overcoming the vicissitudes of time and adapting to changes in the region and the world at large.

The accession of Vietnam to ASEAN in 1995 laid the groundwork for the 'common home' connecting ten Southeast Asian countries.

For the first time, ASEAN adopted the ASEAN Vision 2020 on a community "cohesive in shared identity," satisfying member states' aspirations for a Southeast Asian region "where rivers and mountains no longer divide but unite us in friendship and cooperation." The establishment of the ASEAN Community in 2015, with three pillars of security-political, economic, and socio-cultural, has accelerated the cooperation and regional integration process.

Vietnam will continue to collaborate with ASEAN countries to further promote ASEAN's identity and central role, build a united and strong ASEAN Community, and to bring essential benefits to all ASEAN members as well as partners both within and outside the region, the diplomat said. 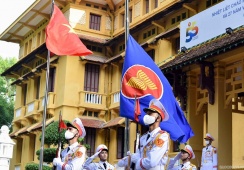 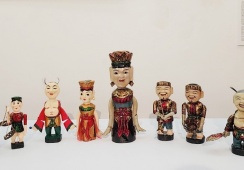 Colorful images of ASEAN on display in Hanoi 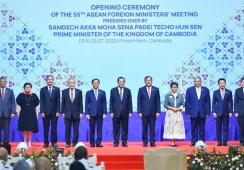