The festival will show the cultural, natural, and human beauty of ASEAN countries.

Hanoi's audiences will have a chance to watch typical cinema features from seven ASEAN countries at the annual ASEAN Film Week 2022.

These films will be screened at 6 and 8pm from May 27 to June 1 at the National Cinema Center in Ba Dinh District, Hanoi, and at the same time from May 28 to June 2 at CineStar in District 1, Ho Chi Minh City. The tickets will be given free at cinemas before showtime.

Vietnamese drama movie “Mat Biec” or Dreamy Eyes (2019) will kick off the ASEAN Film Week 2022 in Hanoi on May 27. Directed by Victor Vu, the movie won the Golden Lotus Award, the highest distinction for feature films at the 21st Vietnam Film Festival held in Thua Thien Hue province in 2021. It was also submitted for the Best International Feature Film at the 93rd Academy Awards in 2021.

A representative from the Ministry of Information and Communications said that the ASEAN Film Week is a part of activities to celebrate the 55th founding anniversary of ASEAN.

It aims to foster the connection of regional countries in terms of people, diplomatic relations, and culture, contributing to the construction of a peaceful, stable, and dynamic community. 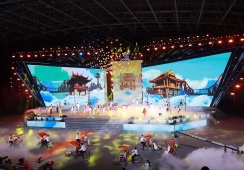