The two sides has adopted the Plan of Action for 2021-2025 that covers the formation of an economic corridor.

ASEAN and India have agreed to explore ways to boost trade in the context that New Delhi has withdrawn from a mega regional free trade agreement that embraces 30% of global GDP.

India’s Prime Minister Narendra Modi at the ASEAN-India Summit last week called for an “early review” of the ASEAN-India Trade in Goods Agreement (AITGA) (that progressively reduces and eliminates duties on 76.4% coverage of goods) and “underlined the importance of diversification and resilience of supply chains for post-Covid economic recovery.”

However, experts have warned that once the Regional Comprehensive Economic Partnership (RCEP) agreement between ASEAN and China, South Korea, Japan, Australia and New Zealand is enacted, trade between RCEP nations will assume primacy, which could affect trade ties with other countries including India.

RCEP, whose negotiations were initiated in November 2012, aims to establish an economic platform between the 10 ASEAN member states and partners, focusing on trade in goods, services and investment.

RCEP becomes the largest free trade agreement in the world encompassing about 30% of global trade.

In November 2019, PM Modi told the RCEP summit in Thailand that India was walking out of the agreement after negotiations for more than six years, as it did not address India’s concerns about being flooded by goods from China, trade deficits and need to protect its agricultural and dairy sectors.

Secretary Riva Ganguly Das of India’s Ministry of External Affairs (MEA) said “As far as India is concerned, we did not join RCEP as it does not address the outstanding issues and concerns of India. However, we remain committed to deepening our trade relations with ASEAN.”

Regarding the relations, at the 17th ASEAN-India Summit held last week, PM Modi also highlighted India’s “Indo-Pacific policy” as an area of convergence for ASEAN and India. He said that there are many similarities between India’s Indo-Pacific Oceans Initiative and ASEAN’s Outlook on Indo-Pacific.

All countries stressed the importance of “a rules-based order in the region including through upholding adherence to international law, especially the UNCLOS. The leaders affirmed the importance of maintaining and promoting peace, stability, safety and security in the South China Sea in particular freedom of navigation and overflight.” UNCLOS stands for the United Nations Convention on the Law of the Sea.

In addition, the two sides’ top priority is to speed up all types of connectivity initiatives regarding physical, economic, social, digital, financial, and maritime.

At the summit, Mr. Modi announced US$1 million contribution to the ASEAN Covid-19 Recovery Fund.

Leaders have adopted a new set of Plan of Action for 2021-2025 to further enhance the cooperation in areas of mutual interest, and continue bringing about tangible benefits to the peoples of both sides as well as contributing to the promotion of peace, stability, and prosperity in the region.

Areas of mutual interest include financial technology (fintech), connectivity, start-ups, and innovation, empowerment of youth and women and the development of micro-, small- and medium-sized enterprise (MSMEs). In addition, engaging in new areas like energy, maritime safety and security, blue economy, digital connectivity and e-commerce will effectively respond to the growing demand of new partnerships.

ASEAN-India connectivity could serve as a basis for Indo-Pacific infrastructure cooperation. The India-Myanmar-Thailand Trilateral Highway and its extension to Cambodia, Lao PDR and Vietnam is pivotal to the next phase of ASEAN-India relation. In the post-Covid-19, restoring connectivity and resilience of supply chains will be key to ASEAN-India economic integration, particularly the development of Northeast India. The 2021-2025 Plan of Action recommends for transforming Trilateral Highway into an Economic Corridor.

Another great opportunity to scale up the ASEAN-India engagements is the development of value chains.

India’s engagements with ASEAN nations in coping with the Covid-19 challenges have paved the way for friendship, good neighborliness, peaceful co-existence and prosperity in the region, the professor noted. 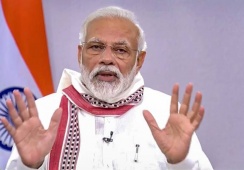 How strong is India’s resilience in global health crisis? 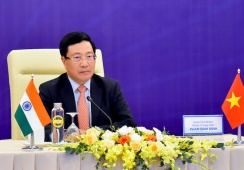