There are many varieties of bun cha across Vietnam, but the Hanoi version is still held in high esteem.

Bun cha has received worldwide recognition after it’s featured on the show Parts Unknown, in which former US President Barack Obama and the host Anthony Bourdain enjoyed this dish together. What’s so special about this dish? Let’s find out!

Bun Cha (grilled pork with rice noodles) is an exquisite dish that’s intricately linked to Hanoi, where it originated. There are three components to this dish: a bowl of grilled thinly sliced pork belly and/or minced pork patties served in light dipping sauce with pickled veggies, a plate of rice noodles, along with a basket of fresh herbs such as perilla leaves, coriander, and lettuce.

There are many varieties of bun cha across Vietnam, but the Hanoi version is still held in high esteem. And although not much is known about how and when it was invented, bun cha has been referred to multiple times in literature.

In Hanoi: 36 Pho Phuong (Hanoi: 36 Streets and Guilds), a book that showcases the variety of Hanoi cuisine, writer Thach Lam acclaims: “It’s just the same kind of Bun Cha, with the same kinds of vegetables and rice noodles. So why is Hanoi’s Bun Cha so scrumptious and delicious, from the fragrance to the sauce.”

The essence of Hanoi’s cuisine relies on delicacy and elegance. Compared to other regions like Ho Chi Minh City (HCMC), where tend to use a lot of strong and sweet flavors, foods in Hanoi are simpler, more rustic, but are imbued with sophistication.

Of course, Bun Cha is not an exception. The sliced pork and pork patties are well-marinated with a variety of spices such as fish sauce, liquid caramel and garlic. The longer the marinating period, the more pronounced the flavor becomes. Afterward, the meat is grilled over hot charcoal until it turns into a gorgeous golden-brown color.

The dipping sauce is also a part making the dish quintessential. It consists of fish sauce, sugar, water and vinegar are combined in a golden ratio. The overall flavor should strike a balance between sweet, sour, and savory. Most stores add chopped garlic to make the sauce even bolder and more pungent. If you’re a fan of spices, don’t hesitate to sprinkle on top some black pepper and slide in a few thin slices of chilies. In the dipping sauce, you’ll also find pickled carrots and green papaya, which add such a flair to the food.

And you cannot forget the component that almost all noodle dishes in Vietnam have – a basket filled with all the fresh herb goodness. There is lettuce, mint, coriander, perilla, and basil, all of which chase away the fattinessof the meat and give a fresh dimension to the meal. So, grab a piece of meat, dip it into the sauce along with some noodles and herbs, and indulge in a stunning harmony of savory, sour, spicy, and sweet flavors.

Bun Cha can be easily found anywhere, from luxurious restaurants to street-side eateries. But one of my favorite spots is a store located in the bustling street Hang Giay. When passing by the store, you’ll be surrounded with the intriguing aroma of grilled pork that’s hard to pass up. It’s actually quite spacious, so there shouldn’t be any problem with seating. If you like, you can choose to sit at the table set up outside of the store and watch the world go by.

In the morning, this store sells pho. But during lunch time, Bun Cha is served. The pork belly slices here are neither too fatty nor too gamy. In fact, they’re soft and very well-seasoned. The minced pork patties are quite special as well; they are wrapped inside perilla leaves of which pungent taste pairs awfully well with grilled meat.

The dipping sauce has a well-balanced flavor, too. The garlic and chilies aren’t put directly into the sauce, so feel free to season to your taste. The herbs are fresh as well!

If you have a chance to visit Hanoi and want to taste something that showcases the best of Hanoi cuisine, give Bun Cha a try. 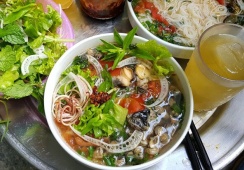 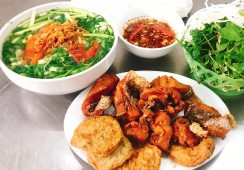