Deputy Spokesperson of Ministry of Foreign Affairs Doan Khac Viet made the statement at a press conference in Hanoi on April 29 following the Chinese fishing ban applied from May 1 to September 16 to a vast area, including Vietnam’s Hoang Sa and part of the Gulf of Tonkin, off the coast of Vietnam.

Viet said the Chinese move violates international law, including the United Nations Convention on the Law of the Sea (UNCLOS) 1982, going against the spirit of the Declaration on the Conduct of Parties in the South China Sea (DOC) and the Vietnam-China Agreement on basic principles guiding the settlement of sea-related issues.

He said Vietnam has a full legal foundation and historical evidence to back its sovereignty claims over Hoang Sa and Truong Sa (Spratly) Islands in the sea.

Over the past years, China illegally and unilaterally declared the seasonal fishing ban in the South China Sea for protecting marine resources, threatening the approach of foreign fishermen.

This year’s ban covers the Bohai Sea, the Yellow Sea, the East China Sea, and the waters north of 12 degrees north latitude in the South China Sea. It means that it covers part of Vietnam’s waters.

This year’s ban has caught public attention over the enforcement of China’s Coast Guard Law in which it allows Chinese forces use force towards foreign ships.

The China Coast Guard (CCG) said it will keep a closer eye on the banned areas to ensure the enforcement of the summer fishing ban. 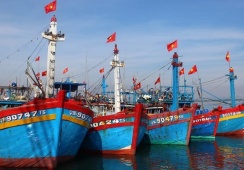 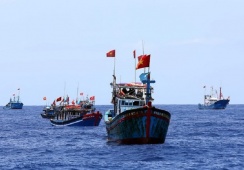