Hanoian audiences will have a chance to learn about Danish society and life through the movies selected.

Danish Film Week 2022 in Hanoi will be launched on July 9 at the National Cinema Center with the movie “The Good Traitor” about World War II.

According to the organizers, the movies screened this time have won several awards and nominations at Danish and international prestigious film festivals.

Some of them include “The Good Traitor”, “The Purity of Vengeance”, “That Time of Year”, “A Perfectly Normal Family”, “Daniel” and “Land of Mine”, all of which represent high quality of Danish film production in recent years.

The narratives of the films are captivating and varied, the organizers said. For example, “The Good Traitor” poses an ethical and personal judgment issue: should one do what he is asked to do in his position or follow his own judgment - even if this action can destroy his career and put him in prison.

“Daniel” will take audiences through the heart-breaking and desperate times that Daniel and his family had to go through in the attempt to free him from the capture of the Islamic State of Iraq and Syria (ISIS )in Syria. Local audiences will have the opportunity to immerse themselves in various life stories, but will also leave the cinema halls with optimistic and hopeful notes and messages.

All films are with Vietnamese and English subtitles, while some are age-restricted.

For the past five years, the Danish Film Weeks has become a popular cultural brand among cinemagoers in various cities in Vietnam and helped enhance the understanding of Vietnamese people and Danish. 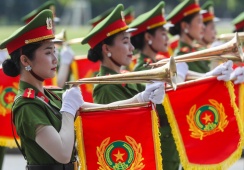 Toyota concert makes a come back