Only 33% of the total 3.9 million tons of the commonly used plastics disposed of per year in Vietnam are recovered and recycled.

For the past two years, Vietnam has been prioritizing the goal of combating plastics pollution. But just when the people’s habit of using plastic products was changing, the emergence of the Covid-19 pandemic along with a booming online economy, have somehow reversed this trend.

An independent survey revealed during the fourth Covid-19 outbreak in Vietnam, up to 75% of people living in Hanoi and Ho Chi Minh City were using food delivery apps.

The growing demand for online delivery has inevitably led to the high consumption of single-use plastic bags and straws.

“The pandemic has significantly changed people’s lives. Normally I would love to eat out with my friends whenever I could. Now, I just simply order the food via Grab, and they come with plastic bags, cups, and straws,” Hoang Nam Ha, a second-year student at the Hanoi-based Academy of Finance, told The Hanoi Times.

“The amount of plastic litter is piling up in my house, but there is no other choice,” he said.

In this regard, a representative of the Hanoi Urban Environment Company (Urenco), the company responsible for waste collection and treatment in the capital city, said it has been carrying out the project of waste separation at source along with plastic waste treatment for a year in inner districts, including Hoan Kiem, Ba Dinh, Hai Ba Trung, and Dong Da.

“Steps by steps, the project has formed a model of waste separation, recycling, and reducing the amount of waste for burial,” the representative told The Hanoi Times.

Urenco’s representative stressed the main goal of the project is to raise public awareness on the impacts of plastic waste on the environment and thus take part in the process of waste separation.

Hanoi is one of many cities and provinces, especially major cities like Ho Chi Minh City and Danang, which are facing an increasing volume of plastic wastes during the social distancing period.

According to environmental experts, plastic waste is posing serious risks to the environment and humans, as it would take hundreds of years to completely decompose.

Traditional treatment of plastic waste by burning or burying would result in microbeads contaminating groundwater or the air and causing severe pollution.

“However, investments in waste management infrastructure have not kept pace. The public and private sector need to work together to address this complex environmental, social, and economic problem and drive policies and investments that help unlock material value,” she said.

Professor Dang Kim Chi from the Vietnam Association for Conservation of Nature and Environment (VACNE) referred to the fact that Vietnam remains the world’s fourth-largest marine plastic polluter by generating over 3.6 million tons of plastic waste every year.

“The responsibility to address plastic pollution is placed in the hands of consumers and the authorities, but these efforts would not be effective unless the whole value chain of plastic becomes effective,” Chi told The Hanoi Times.

To change the people and businesses’ awareness on using single-use plastic products, Chi noted this would depend on numerous factors, including incentive policies, alternative products at affordable prices, supervision mechanisms, and especially waste sorting and recycling mechanism.

“Vietnam’s plastic recycling industry remains underdeveloped, along with the ineffective process of waste separation at source as plastic waste is disposed of together with other trash,” he noted.

“A change in waste treatment technologies and more effective utilization of plastic waste considering it as a resource would help Vietnam better deal with plastic pollution,” said Chi.

Plastic is a valuable resource

A new IFC-World Bank study suggests that managing used plastic as a valuable resource provides a sound business case for scaling up recycling and other plastic circularity efforts while promoting sustainable economic development.

The joint report, Market Study for Vietnam - Plastics Circularity Opportunities and Barriers, finds only 33% of the total 3.9 million tons of the commonly used plastics disposed of per year in Vietnam are recovered and recycled. The study estimates that 75% of the material value of plastics—equivalent to $2.2 billion to $2.9 billion per year is lost to the economy.

Plastic pollution caused by environmental leakage to the marine environment is especially acute for Vietnam given its long coastline. In response, the national action plan for the management of marine plastic litter by 2030 aims to reduce 75% of Vietnam’s marine plastic debris over the next 10 years.

According to Kyle Kelhofer, IFC Country Manager for Vietnam, Cambodia, and Laos, a circular economy is critical for Vietnam to meet low-carbon growth targets. Recycling plastics do not only address plastics pollution but also avoid greenhouse gas emissions and saves valuable material resources.

“Improving the business case for plastic recycling will mobilize increased private sector investment to help address the scourge of plastics pollution while supporting key sectors including tourism, shipping, and fisheries, which have been particularly impacted,” he said.

The researchers from IFC and WB proposed both short and long-term solutions to enhance local demand for recycled plastics and scale up the domestic recycling industry by strengthening the enabling environment for private sector investment.

They also recommended improvement in a waste management capacity, setting “recycled content targets” across major end-use applications, and mandating “design for recycling” standards for plastics, especially for the packaging, among others. 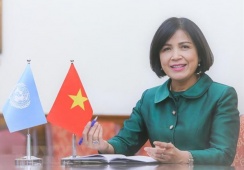 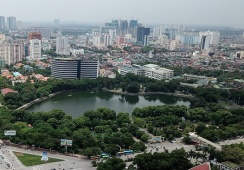