The 79-year-old plaintiff said she will continue the case no matter the ruling is.

The Evry court in France on Monday dismissed a lawsuit brought by a French woman of Vietnamese origin against 14 multinational companies over Agent Orange that the US troop used in the American War in Vietnam.

The court stated that the charges pressed by Tran To Nga, 79, over the production or sale of the highly toxic Agent Orange defoliant to the US during the war in Vietnam was “inadmissible,” ruling that they were “well-founded to avail themselves of jurisdictional immunity,” foreign media reported.

The case, which was initially filed in 2014 and prepared during 2009-2013, is aimed to seek some responsibility from the firms, including Dow Chemical Co and Bayer-Monsanto.

The multinationals argued that the use of the chemical agent was the solely US military’s responsibility.

The lawyer for the American company Monsanto (absorbed in 2018 by the German company Bayer), Maître Jean-Daniel Bretzner, had thus argued that a French court was not competent to judge the action of a sovereign foreign state as part of a wartime “defense policy”, according to the News 24.

DW reported that a Bayer representative was quoted by the AFP news agency as saying that “suppliers during the war” were not responsible. They also rejected the jurisdiction of the court. A lawyer for Monsanto said the US had deployed Agent Orange in the interest of “national defense.”

Tran To Nga who was poisoned by the herbicide Agent Orange during the American War in Vietnam has fought for “justice” for thousands of victims over the past decade.

Working as a journalist and activist in Vietnam in her 20s, To Nga was suffering from Agent Orange effects, including Type 2 diabetes and an extremely rare insulin allergy. One of her daughters died a few months after the birth.

Her grandchildren were born with abnormalities that have been allegedly linked to the chemicals.

To Nga told Tuoi Tre Online before the verdict that she and her lawyers will definitely continue the case.

Millions of people in Vietnam, Laos and Cambodia were exposed to Agent Orange.

She said since the first delivery of a cranial baby in 1965 at the age of 20, she started to collect data, evidence, research on the harmful effects of Agent Orange on women’s reproductive health and Vietnamese children.

“Over the years, through tens of thousands of cases of maternal exposure – abnormal children, we have proven that the harmful effects of Agent Orange on Vietnamese people are real. The world’s scientists have admitted the results,” Phuong said at a workshop held in Ho Chi Minh City on May 8.

Before, military veterans from the US, Australia, and Korea won compensation for the after-effects of Agent Orange.

A verdict in favor of a Vietnamese victim would have set a precedent.

“The US political and moral responsibilities for Vietnamese victims are undeniable,” Vietnamese lawyer Truong Trong Nghia said at the workshop that was held in support to Tran To Nga. He said the lawsuit is not merely aimed to get some compensation but an admission of illegal and immoral deeds they caused.

Ton Nu Thi Ninh, former Vietnamese Ambassador to the EU and Belgium, the Netherlands, and Luxembourg said pursuing the case is a way to seek justice, it will not affect diplomacy. “It’s our determination to protect justice will ultimately earn us their respect,” she said.

In support to Tran To Nga, a book exhibition displaying documents of Agent Orange/dioxin effects is taking place in Ho Chi Minh City.

In 2009, the US Supreme Court denied certiorari and declined to reconsider the ruling of the Court of Appeals over the case filed by VAVA. 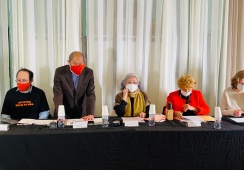 US trial on Monsanto sparks hope to Vietnam's AO victims