Comprehensive cooperation between the two sides remains a core pillar in the relations of both Parties, States, and capitals.

Hanoi expects to realize cooperation agreements with Vientiane and would accompany the latter on the road toward prosperity.

Chairman of the Hanoi People’s Committee Tran Sy Thanh made the commitment during a meeting with Secretary of Vientiane Party Committee Anouphap Tounalom today [August 10].

Tounalom and Vientiane’s high-ranking delegation is on a visit to Hanoi from August 9-14 to strengthen cooperation between Vietnam and Laos in general, and Hanoi with Vientiane in particular, on the occasion of the 60th anniversary of diplomatic relations (September 5, 1962 – September 5, 2022), and 45th anniversary of the signing of Friendship and Cooperation Treaty between Vietnam and Laos (July 18, 1977 – July 18, 2022).

At the meeting, Hanoi’s mayor stressed the significance of the visit of Vientiane’s delegation, saying this is the first high-ranking delegation from a foreign city to Hanoi after the Covid-19 pandemic, and also marks a new milestone in the relations between the two capitals.

Thanh hopes that the activities to celebrate the bilateral relations will be aimed at raising public awareness (especially the young generation) of the special Vietnam-Laos and Hanoi-Vientiane relations, seen as an invaluable asset for both countries.

According to Thanh, Hanoi is aware of the significance of Vietnam-Laos relations, and therefore, is committed to pushing for comprehensive cooperation with Vientiane.

In this regard, Thanh said Hanoi will realize agreements reached between the two sides for the 2022-2025 period.

Among the key priorities, Hanoi would send a delegation on trade promotion to Vientiane and support the city in building the office buildings of the Justice Department and Vientiane’s Procuracy.

For his part, Secretary of Vientiane’s Party Committee Anouphap Tounalom said the comprehensive cooperation between the two sides remains a core pillar in the relations of both Parties, States, and capitals.

In this regard, Tounalom said Laos would strengthen cooperation with Vietnam from the grassroots- to the provincial level.

He noted many Lao companies have joined his entourage this time to seek business opportunities in Hanoi so that both sides could explore cooperation in fields of investment, trade, and tourism.

Tounalom highlighted the support of Hanoi to development projects in Laos in general, and Vientiane in particular, expecting the 2022 Vietnam-Laos Solidarity Year would open up a new chapter in bilateral relations. 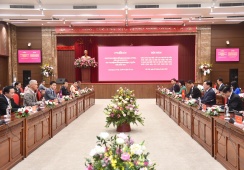 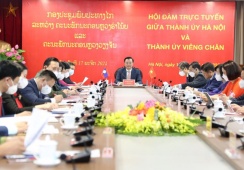