Hanoi and other localities boost trade links for farm produce

The close connection between Hanoi and other cities and provinces has helped balance supply and demand and stabilize selling prices.

Participating businesses shared their ideas at the 2022 supply-demand trade conference, which was hosted by the Hanoi Center for Investment, Trade and Tourism Promotion (HPA) on November 23.

As a participant in the event, Director of Ha Trung Production and Trading Co., Ltd (Phu Yen Province) Nguyen Thi Ha said that as a small company in the South-Central Coast, trade links would enable the company to bring regional products to Hanoi consumers.

Hanoi is home to 28 commercial centers, 132 supermarkets, 453 traditional markets, 2,000 convenience stores, and tens of thousands of grocery stores in districts and towns.

Besides, the city has 35 businesses operating in omni-channels, including e-commerce platforms, supermarkets, distribution systems, and websites.

In the first 10 months of this year, Hanoi’s distributors have supported the consumption of 52,000 tons of fruits and agricultural products from the provinces and cities of the Red River Delta.

Under the provinces/cities’ One Commune One Product (OCOP) program, more than 60 showrooms selling OCOP products in the city have been opened.

The city also coordinated with the provinces and cities of the Red River Delta to organize a week promoting fruit and agricultural products at the BigC Thang Long supermarket, Me Linh Plaza, and Mipec shopping center.

However, the trade connection between the city and other provinces to bring regional goods into the distribution system has not yet been smooth.

Nguyen Thi Mai Phuong, a representative of Thailand-invested Central Retail, said that few large-scale wholesalers are operating in the provinces, making it difficult for Hanoi's firms to purchase large quantities of goods when needed.

In addition, many agricultural products of the provinces have not met the requirements for registration procedures, quality inspection, payment methods, collection, preservation, and transportation.

Information about supply-demand has not been discussed timely among stakeholders, leading to the overproduction of some goods and barriers to consumption.

Director of the Soc Trang Provincial Department of Industry and Trade Vo Van Chieu and representatives from many localities expected Hanoi to support businesses from other provinces to boost consumption in the city.

At the same time, he called on organizations, supermarkets, and trade centers of the city to connect with localities to facilitate cooperation opportunities.

In addition, the Ministry of Industry and Trade needs to organize a national trade promotion campaign to support inter-provincial consumption and export. Hanoi strives to find markets for farm produce and specialties 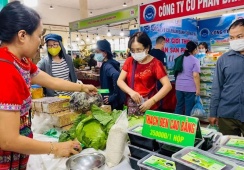