Athens is known as the European Capital of Culture with a long history of more than 3,400 years.

Hanoi and Athens, the two capital cities of Vietnam and Greece, will bolster the relations in cultural and economic fields, officials said on October 20.

According to the representative of Athens authorities, Greece has a long history with a wide range of historical and cultural heritages that are recognized as the world’s tangible and intangible heritages by UNESCO.

The country’s capital city of Athens was founded more than 3,400 years and it is one of the world’s most ancient cities. It is considered the European Capital of Culture.

Tens of millions of tourists come to Athens every year, driving the city’s socio-economic growth. The authorities of Athens have focused on the preservation and promotion of world heritages to boost local tourism and socio-economic development.

Communication has been the key to helping young generations improve their knowledge and understanding of Greek history and culture.

Such knowledge will assist the young Greeks to protect the heritage of the country, while local authorities often import historical and cultural content into in-class lessons to ease accessibility for students.

On his part, Vice Chairman of the Hanoi People’s Committee Chu Xuan Dung spoke highly of the shared information from Athens authorities.

Hanoi wants to further exchange the experiences and practices in the preservation of cultural heritages, Vice Chairman of the Hanoi People’s Committee Chu Xuan Dung said at the meeting between the delegation of Hanoi and the authorities of Athens.

He also expected Athens to assist Hanoi in the training of Vietnamese specialists and officials to better preserve local heritages in the city.

In addition, vice chairman Dung said that the two cities should strengthen the cooperation between local travel agencies and management units on expectations that the cooperation will boost the number of travelers between Vietnam and Greece.

He also suggested the two cities increase the number and frequency of cultural exchanges to introduce Vietnamese and Greek cultures to the people of the two nations, thus tightening the bond between Vietnam and Greece.

Hanoi will provide the best conditions for Greek companies to set up and further develop their business in Vietnam, Dung said. The authorities of the two cities agreed that they would maintain constant information exchange and discussion to seek opportunities to strengthen their relationships in the fields of trade, investment, environmental protection, sport, and culture.

On October 20, the Vietnamese delegation led by the Vice Secretary of the Hanoi Communist Party Committee Nguyen Van Phong paid a visit to the Vietnam Embassy in Greece.

Speaking at the meeting, Ambassador Le Hong Truong briefed the Vietnamese delegation about the socio-economic development of Greece and Athens.

Truong also suggested several fields in which Hanoi and Athens may further improve the two-way cooperation.

In return, vice secretary Phong asked the Vietnamese Embassy in Greece to better work with Hanoi to boost the relations between the capital city with its partners in Greece. 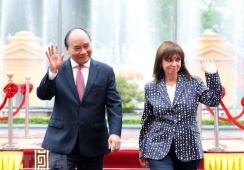 Greece wants to be transshipment hub for Vietnam goods to EU