The night-time tours are among the capital city’s activities to attract three million international visitors set for 2023.

Various night tours will be launched in the near future, as well as new and attractive tourism products to attract tourists, especially international travelers, according to the Hanoi Department of Tourism,

The information was released at a conference reviewing tourism in Hanoi in 2022 held by the municipal Department of Tourism on January 5 .

Accordingly, since Vietnam opened its doors to inbound tourism on March 15 until December 31, 2022, Hanoi has welcomed 1.5 million international visitors.

This year, Hanoi's tourism sector has targeted welcoming three million international visitors, of which 2.1 million will be overnight guests, twice as many as in 2022.

"Unique and attractive tourism products need to be built or revamped at all costs to better serve tourists from key markets," he stated.

Recently, several night tours have been launched in Hanoi that had received positive feedback from travelers. Some of the typical night tours include the “Sacred Night - Glorious Vietnamese Spirit” tour in Hoa Lo Prison, the “Deciphering Thang Long Imperial Citadel”, the night-time pedestrian spaces around Hoan Kiem Lake in Hoan Kiem District and Dao Ngoc-Ngu Xa Peninsula on Truc Bach Lake in Ba Dinh District, among others.

At the meeting, Nguyen Hong Chi, the Deputy Director of the Hanoi-Thang Long Heritage Conservation Center, said that the unit is now developing various services, including a night tour for local visitors.

"The 'Deciphering the Imperial Citadel of Thang Long' night tour has contributed to the development of the local nighttime economy, as well as meeting the need for entertainment for domestic and international overnight visitors to Hanoi," she said.

The center strives to cater to visitors every night of the week in the coming times," she added.

The director of the municipal Department of Tourism, Dang Huong Giang, stated that, in addition to focusing on potential areas for the development of the nighttime economy, the city should clarify the conditions for certain nighttime services and enact specific regulations on the matter, as well as measures to deal with violations.

Night tours of Hanoi, in particular, and other typical cultural tourism products, are designed to increase tourists' length of stay and spending.

The expansion of nighttime economic activities is expected to form a typical economic sector contributing to the capital's socio-economic development.

In 2023, the Hanoi tourism authority and travel agencies will continue to promote night tourism products. 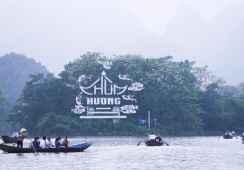 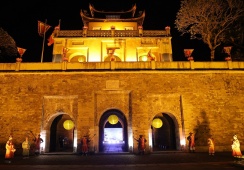 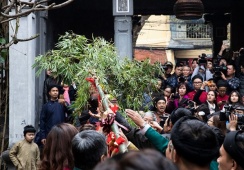