The recent establishment of the Vietnam-South Korea center for smart city cooperation would lay the foundation for a more substantial partnership in this field between the two countries.

Hanoi is expected to work with South Korean partners in smart city projects, seen as one of the capital’s development trends for the future.

“Making the city smarter continues to be Hanoi’s long-term goal, meanwhile, it is the field that South Korea has a strong expertise in.”

On this occasion, Tuan expressed his appreciation of Hanoi’s authorities in particular, and the Vietnamese Government in general, for the close cooperation with the South Korean counterparts, including Seoul, under the framework of the bilateral strategic partnership.

The Vice Chairman expected the soon upgrade of the relations to a comprehensive partnership during the 30th anniversary of diplomatic relations would further take the cooperation between the two countries to a new height.

Lee also stressed the huge potential for cooperation between the two sides in smart city development.

Since 2020, South Korea’s Ministry of Land, Infrastructure, and Transport has cooperated with several provinces/cities in Vietnam in exploring opportunities for cooperation in smart city projects.

Lee also referred to the recent establishment of the Vietnam-South Korea center for smart city cooperation in October, saying this would lay the foundation for a more substantial partnership in this field between the two countries. 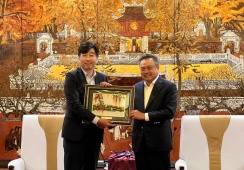